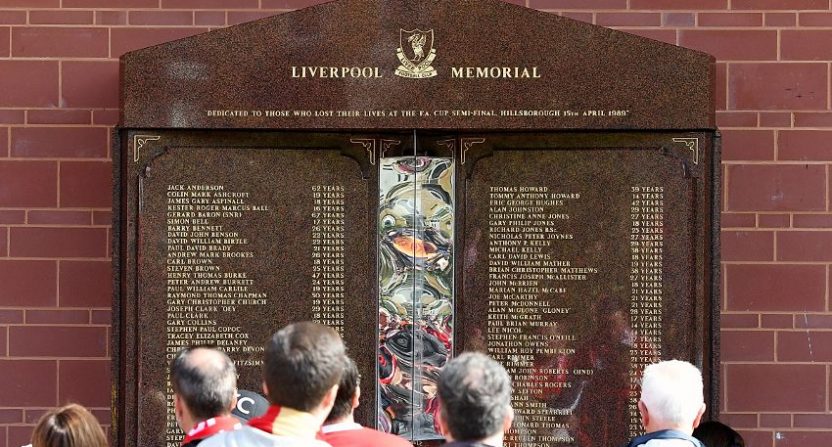 People who have been fighting for justice for the 96 Liverpool fans killed at Hillsborough were dealt a blow as David Duckenfield, the police chief in charge at the 1989 FA Cup semifinal between Liverpool and Nottingham Forest, was found not guilty of gross negligence manslaughter in a retrial.

It was a verdict that wasn’t exactly a surprise. Not because Duckenfield wasn’t guilty, but because of the high bar that was needed to overcome in order to convict. Plus, it’s been 30 years and thanks to misinformation and cover up by some of the British media, the British government, and the Hillsborough police, we’ve just now gotten to this point where people are being put on trial.

To summarize what took place 30 years ago for those unaware, 96 people were killed and hundreds more were injured in a crush at the Liverpool fan end at the FA Cup semifinal. Due to how the stadium was built, the stand had pens that essentially kept people in like cattle and when fans entering the stadium walked through a tunnel to get to that section, they didn’t realize it was full until it was too late and hundreds more were trying to enter behind them.

How Duckenfield and the police factor in was that no one gave any warning to fans that the middle pen was already full and because the game was starting and many fans were still outside the gates, an inexperienced Duckenfield gave the order to open the gates and just let everyone in at the same time. Many went to the already full pen, unaware it was already full, and tragedy occurred.

In 2009, the British government began an investigation and three years later, found and announced that a “lack of police control” was the primary cause of the disaster and that no Liverpool fan was responsible. The investigation discovered that police not only took the blood alcohol level on every victim, many being children, and conducted background checks in an attempt to paint fans as a bunch of drunks trying to overpower the police, they also altered statements from witnesses, including officers who were there, to better fit their overall story.

This leads to 2019 as people like Duckenfield are finally facing trial. While the investigations and info show that Duckenfield did wrong, a court of law is different than a court of public opinion. According to BBC’s legal affairs correspondent Clive Coleman, it takes a lot for someone to be found guilty for what Duckenfield was being charged of.

For a person to be found guilty of gross negligence manslaughter the prosecution has to prove that he – or she – owed a duty of care to the victim and negligently breached it.

It also must be proved that it could be foreseen the breach would give rise to an obvious risk of death, that it caused the death and – most challenging of all – that the circumstances of the breach were so reprehensible as to justify the conclusion that it amounted to gross negligence and required criminal sanction.

That sets the bar very high for the prosecution.

The defendant’s conduct must fall so far below the standard to be expected of a reasonably competent and careful person in the defendant’s position, that it was something truly, exceptionally bad.

It’s also incredibly tough to convict in a situation like this because of how long it’s taken. Even though it’s been widely discredited both by the public and the government, some people probably still believe the lies The Sun published 3o years ago. When lies get out in public before the truth does, it’s tough to put that genie back in its bottle and have everyone actually know the truth.

If there’s one thing to know about the victim’s families, it’s that these people never give up. In many ways, it’s their relentless “never give up” attitude that got them this far. There was a time where nobody outside of Merseyside believed these people so to get from there to here is an achievement in and of itself. At the same time, justice for the 96 is still far away. Based on Duckenfield’s verdict, justice might never come in the way these people hoped it would be.