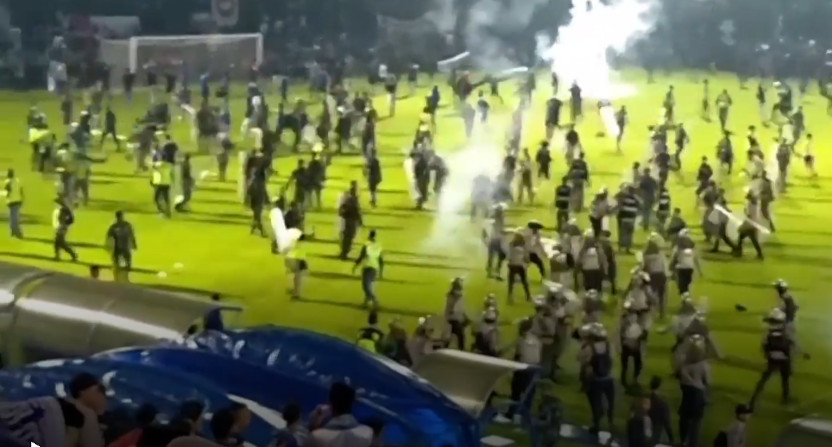 Soccer stadiums have seen many tragic fan deaths over the years, and that happened again in Indonesia Saturday night. There, after a Persebaya Surabaya-Arema match Saturday night that finished 3-2 for road team Persebaya Surabaya, many fans rushed the field. The police at the stadium responded with tear gas, and as per a New York Times report Sunday morning, the stampede in the wake of that led to more than 125 people being killed:

At least 150 dead at a soccer match in Indonesia. Live updates: https://t.co/pHyu2qIkKV

Here’s more from that report:

Soccer fans in Indonesia rushed the field after a professional soccer match on Saturday night, prompting the police to fire tear gas into tightly packed crowds and setting off a stampede that killed at least 125 people, local officials said.

Fans had packed the Kanjuruhan Stadium in Malang, Indonesia, to see the home team —Arema — take on Persebaya Surabaya. After Arema lost the game 3-2, fans rushed the field.

The unrest prompted the police to fire tear gas which caused panic, Inspector General Nico Afinta, the East Java Police chief, said at a news conference. As of Sunday night, 125 people were dead, according to a spokesman for the national police. There were reports that an additional 300 had been injured. The death toll had risen and fallen throughout the day, and police said earlier tolls may have counted some of the dead twice.

…In a televised speech to the nation, President Joko Widodo said he had asked the national police chief to conduct a thorough investigation into what happened and ordered an evaluation of security at soccer matches.

“I regret that this tragedy occurred,” Mr. Joko said. “And I hope this is the last football tragedy in the country.

And here’s the video included in that report:

There is an unfortunately-long history of these kinds of events at soccer matches. And there is also an unfortunately-long history of people trying to place blame on fans for incidents like these, when the real situation usually goes well beyond that. Regardless of where the responsibility lies, more than 125 people are dead as a result of what happened in Indonesia Saturday. And that’s a tragedy the wider sports world should pay attention to, and should work to prevent happening in the future.

[The New York Times; top screencap from a NYT video in that previous link]