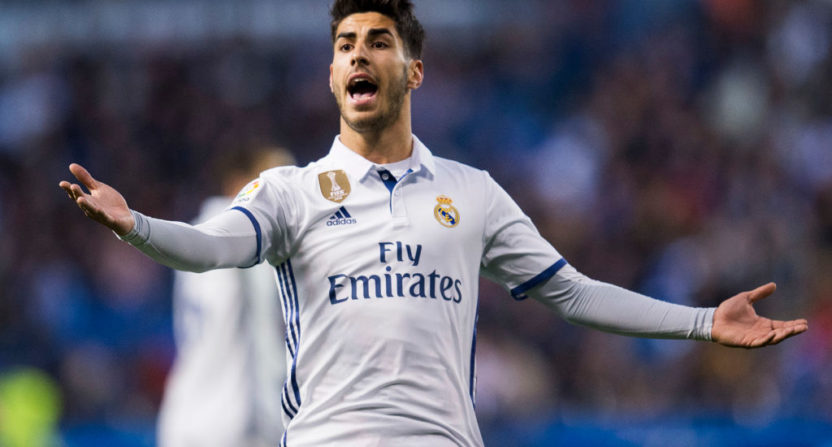 Real Madrid is set to open play in the UEFA Champions League later today, but Marco Asensio will not be in action due to quite the bizarre shaving mishap… on his leg.

According to Pro Soccer Talk, Asensio is dealing with an infected leg following a shaving accident that involved a pimple. Hate when that happens. Via Pro Soccer Talk:

After Real boss Zinedine Zidane told a press conference that Asensio had missed training this week as he couldn’t pull up his socks due a pimple on his leg, a report from ABC Espana states the winger has cut the pimple in a shaving accident and it has become infected.

Well, that is quite the explanation. How bad was this pimple in the first place? And how bad must the infection be to not be able to lift a sock high enough? Zidane said he is hopeful Asensio will be able to return for Sunday’s match against Real Sociedad.

Whatever the severity of this injury may be, the reaction on Twitter has gone about as expected.

When you see why Marco Asensio can't play tonight. pic.twitter.com/0ysTV8MqPl

Marco Asensio is out of Real Madrid's team due to an infected pimple after shaving his legs. Never would've happened in my day. We waxed.

Marco Asensio missing Real's game with Apoel because a pimple got infected whilst shaving his legs is the most modern football story ever pic.twitter.com/TcZrBrsm1R

I’ll admit to my own shaving miscues involving unwanted blemishes on my face in my teenage years, but I have not once encountered a similar experience elsewhere on my body like this.