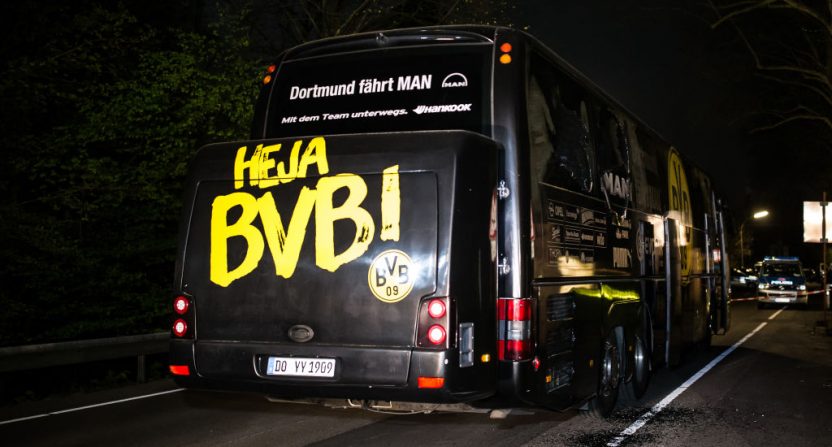 Borussia Dortmund was forced to play their UEFA Champions League game against Monaco just one day after the startling attack on the team bus injured defender Marc Bartra. In the wake of the attack, an investigation is still ongoing into just who was responsible.

At first, the attack was linked to ISIS thanks to a letter found at the scene of the explosion. However, investigators have determined that letter to not be credible. Likewise, a claim from the far-left in Germany has been dismissed. Now, a far-right group has sent an e-mail to a newspaper claiming responsibility for the Dortmund attack and threatening another.

The letter from the far-right group indicates that the Dortmund bus was targeted as a “final warning” against growing mutli-culturalism in Germany.

Far-right plotters have reportedly claimed responsibility for the attack on the Dortmund Borussia team bus which wounded defender Marc Bartra.

An anonymous email sent to Berlin’s Tagesspiegel daily newspaper said the triple blast was intended to be a “final warning” against multicultural policies.

It cited Adolf Hitler and warned of a potential further attack, the newspaper said.

Federal prosecutors are now examining the message, the latest in a number of claims made over Tuesday night’s triple explosion on the bus.

Police had earlier revealed that a letter was found at the scene suggesting an Islamist extremist was responsible, but they had “significant doubts” over its credibility.

Prosecutors have questioned the authenticity of another claim posted online, suggesting a left-wing extremist motive.

Rukmini Callimachi, a reporter for the New York Times, also has a fascinating thread on her Twitter page as to the specifics of the Dortmund bus blast and the materials that were used. It is apparent that whoever was ultimately responsible may have set it up to make it look like it was ISIS, but the details don’t match up. Most notably, the material used in the bombing were military-grade and are linked to Nazi-inspired groups.

.@bopanc 3. The reason is because TATP is made from commonly available household ingredients. You can buy them over the counter, avoiding detection

.@bopanc 4. As @bopanc writes, explosives used have been employed in past by Nazi groups. It was framed to look like IS but there were a # of errors

.@bopanc @charliewinter @PeterRNeumann 12. The investigation remains open and ISIS may still surprise us. But from what is now known, this attack would be *atypical* of ISIS.

No final verdict has yet been reached on who is ultimately responsible but it’s certainly a distressing time around Europe and around the globe. Another report has indicated that the Dortmund team bus could have been just a second or two away from catastrophic injuries and possible fatalities from the bomb blast. It’s a miracle nobody was more seriously injured and hopefully police can catch whoever is responsible before anything else takes place.