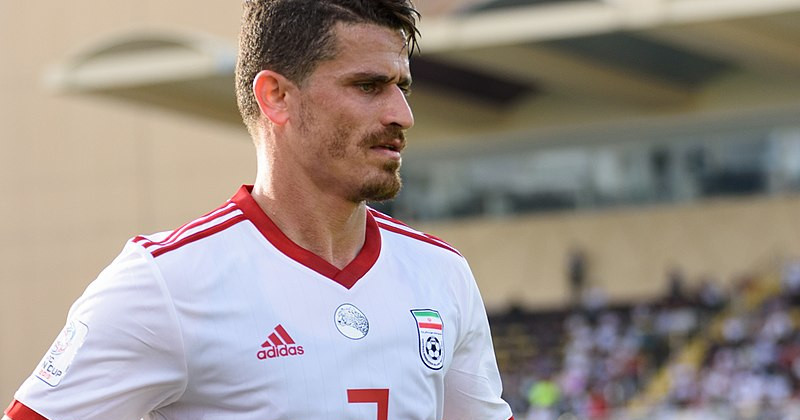 Vouria Ghafouri, an Iranian soccer player who hasn’t played for the national team since 2019, has been arrested by Iran for criticism of the Iranian government. That’s according to the country’s Fars news agency.  As per Rob Harris of Sky News, the cited reason for Ghafouri’s arrest was “tarnishing the reputation of the national team and spreading propaganda against the state.”

Iran's Fars news agency reporting the arrest of footballer Voria Ghafouri, who hasn't played for the national team since criticising the govt in 2019.

The report of the arrest has potential ramifications for the current Iran national team at the 2022 World Cup in Qatar. Iran plays its second game in Group B on Friday against Wales before playing the United States on Tuesday.

The Iran national team protested the Iranian government’s response to the police killing of Mahsa Amini by standing silently during the playing of the Iranian national anthem before its game against England. Amini was arrested by Iran’s so-called “morality police” for improperly wearing her hijab.

Amini’s death set off national protests that have drawn support around the globe. Iran has responded to these protests by arresting thousands, with an estimated more than 300 dying during the protests, according to the United Nations. The UN reported 40 people were killed in the past week.

Ghafouri, 35, is not on the 2022 World Cup team. He has been a frequent critic of the Iranian government. He had often played for the national team from 2014 to 2019, including in the run-up to the 2018 World Cup and in the 2019 Asian Cup (he’s seen above during that competition). And he had played for Tehran-based Persian Gulf Pro League team Esteghlal from 2016 through this year, helping them on an unbeaten run to the 2021-22 title. But they opted not to renew his contract this June, shortly after some of his government-critical remarks; that sparked protests. He later signed with Foolah FC, based in Ahwaz (in southwest Iran), in July.

Beyond Ghafouri’s comments, the courageous actions against an oppressive regime within Iran particularly went into the sports world last month when climber Elnaz Rekabi chose not to wear a hijab during competition. The men’s national team then took that act of righteous defiance to the biggest platform possible in Qatar in front of millions of people watching the tournament.

Before the team staged a protest during the national anthem, captain Ehsan Hajsafi supported the protesters and women’s rights in Iran in a pre-match press conference. Some fans are choosing to protest watching Iran in the World Cup in solidarity to the push for social change following the police killing of Amini.

IMPORTANT 🇮🇷 Ahead of their game against England, Iran’s captain Ehsan Hajsafi becomes the first Iranian player to speak out in support of women’s rights protesters in his home country, expressing condolences to families who’ve lost loved ones.pic.twitter.com/iyOiZ9cikl

There was worry entering the tournament that the Iranian government would somehow influence the decisions of which players could play, let alone what they might do to the players or their families once they were back in Iran.

The case of Ghafouri proves that remains an important concern.