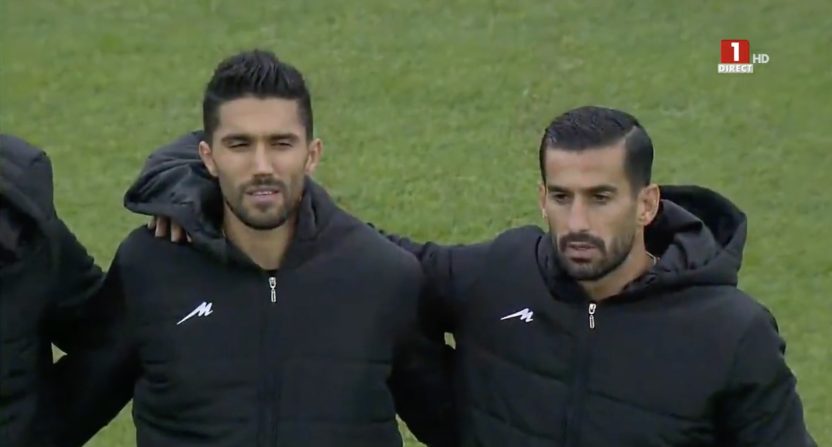 The 2022 FIFA World Cup is underway in Qatar, and with it, a platform for specific teams to show their solidarity with issues taking place back home.

The people of Iran have been embattled with their government concerning women’s rights, leading to severe injuries and deaths–and now death sentences–for many protesters.

From the mandatory wearing of the hijab for all women to security forces coming to schools to force students and teachers alike to sing a pro-regime song–leading to the death of Asra Pahani, the protesters are effectively changing the entire political landscape of the country.

So when the Iranian men’s soccer team took to the pitch in their tournament opener against England, the question of whether or not they would take a stand was quickly answered by not singing their national anthem. This was on the heels of the team wearing black jackets over their jerseys during the national anthem in a September friendly to support the protests.

The Iran National Anthem plays for the first time at the 2022 FIFA World Cup 🇮🇷 pic.twitter.com/R5HAsuw5FQ

Iranians in attendance were also showing their support for the protesters back home:

Iran fans make their voice heard ahead of their World Cup opener against England. pic.twitter.com/UlerfE3tZ3

Perhaps the bravest show of support happened in a prematch interview when Iranian captain Ehsan Hajsafi voiced his support for the protesters, even offering condolences to families who’ve lost loved ones:

IMPORTANT 🇮🇷 Ahead of their game against England, Iran’s captain Ehsan Hajsafi becomes the first Iranian player to speak out in support of women’s rights protesters in his home country, expressing condolences to families who’ve lost loved ones.pic.twitter.com/iyOiZ9cikl

These acts may not be as dangerous as those who are actually protesting in Iran but getting this out on a stage where the entire world is watching is very important as well. Iran is set to play Wales at Ahmad bin Ali Stadium this Friday at 5 am ET.