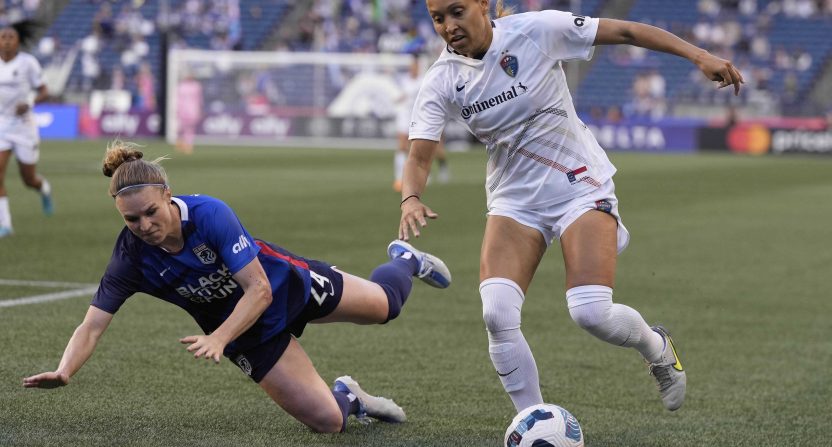 Defender Jaelene Daniels will not play for the North Carolina Courage or participate in their Pride Night on Friday as the team will be wearing pride-themed jerseys in support of the LGBTQIA+ community.

Daniels is not listed on the roster for Friday’s matchup against the Washington Spirit in WakeMed Soccer Park in Cary, N.C. The National Women’s Soccer League franchise made an announcement around the decision as well.

“Jaelene will not be rostered tonight as she has made the decision to not wear our Pride jersey. While we’re disappointed with her choice, we respect her right to make that decision for herself,”  the team said in a statement. “We’re excited to celebrate the LGBTQIA+ community with our fans, players, and staff tonight and look forward to hosting our first ever Pride Festival before kickoff.”

Thank you to @TheFreshMarket for supporting us on Pride Night (and always) and for your valued partnership with the club! #CourageUnitesUs | #ThisIsTheFreshMarket pic.twitter.com/89Fg7YgF5j

It’s likely that the franchise expected this outcome as Daniels has opposed wearing a pride jersey before. In 2017, she declined a call-up from the U.S. Women’s National Team because she didn’t want to wear a Pride Month jersey, which she says conflicts with her religious beliefs.

“I just felt so convicted in my spirit that it wasn’t my job to wear this jersey,” Daniels said on a Christian talk show in 2018. “I knew in my spirit I was doing the right thing. I knew I was being obedient. Just because you are obedient doesn’t make it easy.”

The 29-year-old retired from NWSL in 2020 after six seasons but re-signed with the Courage in December on a one-year deal, though there was some controversy around it at the time given her stance. The club had to put out a statement explaining why they’d decided to bring Daniels back.

“In response to the recent news of re-signing Jaelene Daniels, we as a club acknowledge the impact this announcement has on our community,” the Courage said in a statement. “We’ve spent the past few days reading your messages and reflecting on our actions. We are very sorry to all those we have hurt, especially those within the LGBTQIA+ community. The decision to re-sign Jaelene was not made lightly and included significant conversations between organization leadership and Jaelene. The priority expressed in those conversations is the safety of our players and maintaining an inclusive, respectful space for the entire team.”

Meanwhile, Daniels made a statement of her own on Instagram, explaining her beliefs.

“I remain committed to my faith and my desire for people to know that my love for them isn’t based on their belief system or sexuality,” said Daniels. “I pray and firmly believe that my teammates know how much I cherish them, respect them and love them.”