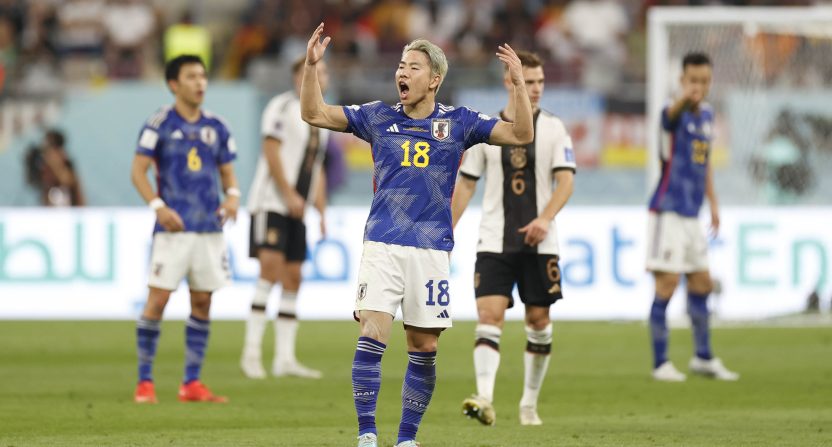 Japan already knew they had their work cut out for them, being paired in a group with soccer powerhouses Germany and Spain. But Japan entered their opening contest of the 2022 FIFA World Cup without fear to score two late goals and cap a comeback victory over Germany.

Four minutes after being subbed on, Ritsu Dōan scored the equalizer for Japan in an attack that consisted of five Japanese players in the box, with Dōan getting the rebound.

It was a beautiful team goal but Japan wasn’t done.

Just eight minutes later, fellow substitute Takuma Asano scored after perfectly trapping a long ball while physically keeping Nico Schlotterbeck behind him and then beating German goalkeeper Manuel Neuer on the near post. After then, it was Japan on the defensive as they held on for the 2-1 win over the four time World Cup champs.

This adds to the pre-World Cup uncertainty for Germany, who have been struggling on the main stage over the last four years. In the 2018 World Cup, Germany disappointed by scoring three points and finishing last in their group. At Euro 2020, Germany made the round of 16 but lost to England after finishing runner-up to France in their group.

Many were amazed by what Japan did to rocket to the top of Group E.

Japan in the second-half pic.twitter.com/a9sqVA4El5

Japan have scored 2 goals at the World Cup so far, both from substitutes. They are the only team with 100% of their goals coming from the bench.

Yesterday Saudi Arabia 🇸🇦 provided the shock of the day.

Today Japan 🇯🇵 did that as they defeated Germany 🇩🇪 2-1. What a second half comeback. #WorldcupQatar2022 pic.twitter.com/j2JwV1Oqsm

🇩🇪 Germany had been unbeaten in 25 straight World Cup games when scoring first (23 wins), last losing to Bulgaria in the 1994 quarters.

Japan surprising the whole world man. This is what the world cup is all about. What a performance

Japan follows on the heels of fellow Asian country Saudi Arabia. In similar fashion just the day before, Saudi Arabia overcame a one goal deficit from a first half penalty kick to score twice in the second half and defeat Argentina.

Japan will face Costa Rica with a chance to likely clinch a knockout stage berth before going to play Spain in the final group stage game.