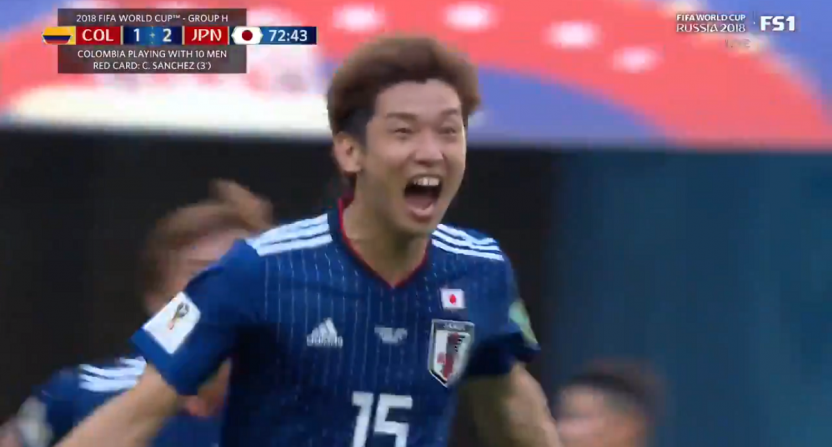 Japan wasn’t expected to have much of a shot today against Colombia, but this match changed very early on thanks to an obvious goal-saving handball resulting in a red card for Carlos Sanchez in the third minute.

Japan dispatched the penalty, too, meaning just a few minutes into the match, Japan had a stunning goal advantage and an even bigger man advantage.

Kagawa slots home the penalty to give Japan the early lead after Carlos Sanchez's handball in the box! pic.twitter.com/Y9HXuLvGOV

Colombia, though, didn’t give up, and they were rewarded late in the first half when Juan Quintero pulled the ol’ under the wall free kick trick:

The Colombian hits it under the wall and sneaks it into the near post to equalize vs Japan. pic.twitter.com/Q3qm22FYs0

That meant things went to halftime level, and with the score still tied 1-1 with around thirty minutes remaining, Colombia manager Jose Pekerman decided to go for it, sending on star forward James Rodriguez, who wasn’t fit enough to start.

But it was Japan who would strike next, thanks to a perfect header on this corner:

Japan re-takes the lead thanks to a header from Osako! pic.twitter.com/y9HnWhl7iI

And in the end, that was the difference. Obviously the man advantage was the key for Japan, but they definitely still earned the three points, and they now have an excellent shot to make it out of the group stage for just the third time ever (2002, 2010.)

Colombia, meanwhile, should still feel good about their chances of advancing. They’ll be favored against both Poland and Senegal, and while neither game is an assured victory, and the margin for error is now much smaller, six points is still very much within reach, and should be enough to qualify for the round of 16, especially if James keeps healing. They should probably avoid the early red cards, though.