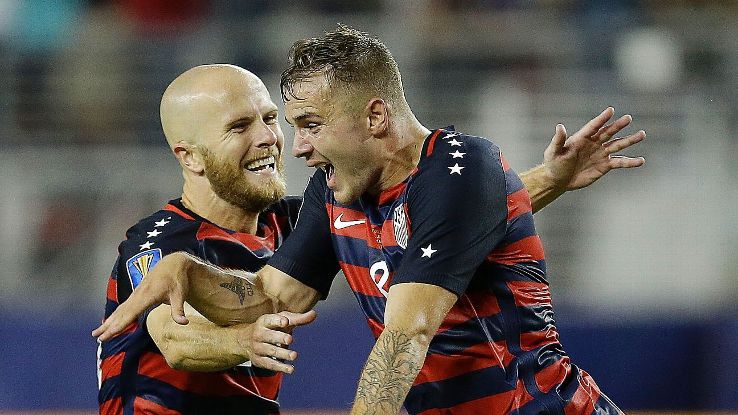 In recent US Soccer history, there hasn’t been a much more fascinating odyssey and journey than that of Jordan Morris. From a relatively unknown college forward with Stanford, to scoring against Mexico while still in college, to becoming the most expensive Homegrown Player signing in MLS history and now a hero in the Gold Cup Final, Morris’ story is one that’s unique to US soccer.

With this new twist, the 22-year-old may have revived a moribund season for club and country, and booked a ticket on a potential future flight to Russia as well.

In his three seasons at Stanford, Morris won the Hermann Trophy as the best player in all of college soccer, led Stanford to its first Pac-12 title in 12 years during his freshman year, and scored in the 2015 National Championship Game against Clemson. But well before that, he caught the eye of Jurgen Klinsmann when the US was training at Stanford prior to the 2014 World Cup. He then became the first college player since Chris Albright 15 years earlier to earn a call-up when the US played the Czech Republic in September of 2014, earning his first cap against Ireland two months later, and scored a notable goal against Mexico in the Alamodome seven months later. All the while, he was still just another college student, but now with exceptional hype and hope placed on his shoulders.

The hype train was chugging along full speed, but the next question was where he’d play. Werder Bremen offered him a trial, and after a successful stint in January of last year, the club offered him a contract. But the prospect of playing for his hometown Seattle Sounders, and the richest Homegrown Player contract in league history, tempted him to stay at home instead of trying his luck in Germany. For Morris, whose hype was already growing quick and fast, the spotlight was now on for who seemed at that point to be the brightest prospect in the US player pool.

After 12 goals in his debut season with Seattle, he won Rookie of the Year going away and in Clint Dempsey’s absence, helped lead the Sounders to an amazing MLS Cup crown. His national team stock was growing too, though he wasn’t on the Copa America Centenario roster. Even with a managerial change at the national team level, and the coach/scout who put his faith in him was now unemployed, Morris still figured to be a huge piece in the US puzzle in spite of the change.

But 2017 has been a rough year for Morris. He suffered an ankle injury early in the Sounders season which caused him to miss the March qualifiers and held him to only two goals for the Sounders before he departed for the Gold Cup. He was a man in dire need of confidence, and what seemed like a sure place in a future US 23-man roster now was in question.

Like his journey to reach the heights he’s at now, his Gold Cup was also up and down with twists and turns aplenty. He scored a brace in the bizarre game against Martinique, but was on the bench for three of the US’ first four games in the tournament. Even with the goals, it seemed that his moments to impress Bruce Arena were perhaps gone. And it sure looked like Clint Dempsey would replace Morris after he switched off defending Je-Vaughn Watson on the set piece where Watson scored.

Arena on Morris: "My predecessor did an outstanding job getting him involved in the program." #usmnt

But as has been Morris’ story, he was in the right place at the right time with the perfect finish and a goal that will be etched in US history. His hype was immense, and for a time it started to look like his moment in the spotlight was gone. But just as he caught Jurgen Klinsmann’s eye during a one-off training session in May three years ago, the fortuitous goal he scored may have bought the Sounders star another chance at the World Cup, or at least the US’ qualifiers come September 1 against Costa Rica. His goal was so similar to the goals he scored at all levels, and with his speed and versatility, that knack, which might be coming back ever-so-slowly, might be his ticket going forward.

He came onto the US soccer scene almost by accident. His only youth team appearances before that fateful training session was with a Toulon Tournament team in 2013. But he took his chance that afternoon three years ago as he did tonight, and now his national team career is back on track and brighter than ever.

From a little known Stanford forward, to an immensely hyped prospect for the present and future, onto becoming the most expensive and ballyhooed Homegrown Player signing in MLS and now a Gold Cup Final hero; Jordan Morris’ story is unique to US soccer, and one that catapulted him to the stage in Santa Clara, not 20 miles away from where he played Pac-12 soccer, as a Gold Cup Champion and US soccer hero, at least for one night.

And even Jurgen Klinsmann, as reviled as he is by US fans, could use some credit for putting his trust and faith in a player like Morris, one who has come good beyond some of the expectations and hype packaged along with him.

His career with both the Sounders and the United States now seems to be right back on track, and Bruce Arena and his country couldn’t be happier because of it.