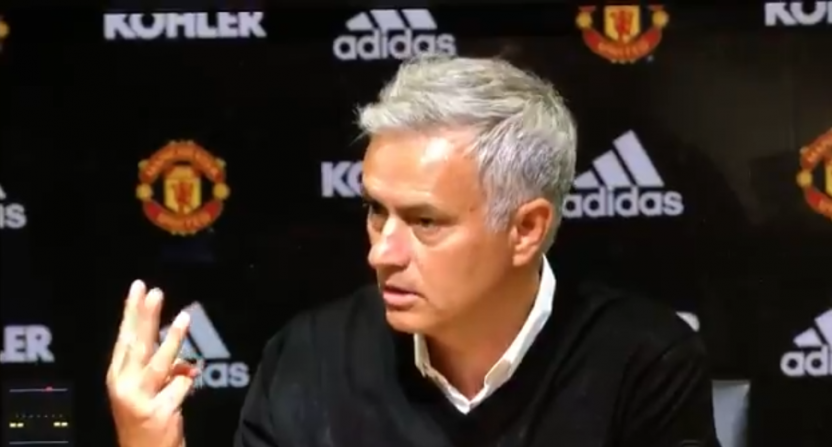 Manchester United and their manager Jose Mourinho have dominated the headlines this season for all the wrong reasons. The soap opera that is Mourinho’s third year at the club has predictably been the talk from just about everyone. Whether it’s lackluster on field performances or wild off the field issues, rarely a day goes by where Mourinho doesn’t own the back page.

Over the past two years, I’ve lost count how many times I’ve written about the always-was-doomed-to-fail marriage between Manchester United and Jose Mourinho, about how the philosophy of the club and Mourinho were not a match.

This is not one of those posts.

This isn’t about Mourinho’s persona, or Mourinho the brand. This post will distance itself as much as possible from Mourinho’s off-field antics to focus on one thing: Mourinho’s on field coaching. More specifically, Mourinho’s inability to adapt to a changing game.

You can’t talk about Jose Mourinho without talking about his history. He’s a manager who molds teams into defensive fortresses. His teams start from the center spine and branch outwards. His teams are famous for not conceding goals. He’d rather win a match 1-0 than 4-3. Mourinho has two types of famous wins, the kind where the game stays 0-0 only for his team to knick one late, or the time where his side scores early and then kills off the game for a 1-0 win.

This season, he’s made it clear that he doesn’t think the center backs at Manchester United are up to par. He felt that way last year as well, which may explain why United opened the season playing fluid attacking football and saw them routinely score four goals in a match for the first two months of the season. But as soon as the results stopped going United’s way, Mourinho reverted to the pragmatism he’s been known for: Defense first, defense always.

It’s not easy to play that way when your center backs are iffy at best. Mourinho’s strategy to compensate for the quality of his defenders was to play a more defensive style, put more defensive midfielders on the pitch, and throw fewer people forward in attack.

The style didn’t suit United too well. Their goal scoring dropped significantly and the chances they conceded increased. They managed to finish second largely because David de Gea had a statistically historical season. This season, when he’s come back down to earth a bit, United have been unable to get results.

15 years ago when he was at Chelsea, Mourinho’s defensive tactics revolutionized the game. Everyone wanted to build their teams the same way. But that was 15 years ago, the game has since changed as it always does.

These days, the best teams are the ones that push forward and attack, even if that means leaving their defense hanging a bit. Last season, Manchester City won the Premier League with 100 points while Liverpool and Real Madrid contested the Champions League final. All three had big questions on defense, but they defended so high up the field that it rarely mattered.

The new philosophy became; if you can’t defend then the best defense is to have the best offense and just score more than your opponents.

Last Saturday at Stamford Bridge, it looked like Mourinho had finally accepted that was what he was going to need to do. In a match where Mourinho would have typically tried to clog up the midfield and stifle his opponents, Mourinho went in the other direction. He deployed a front three of Romelu Lukaku, Marcus Rashford, and Anthony Martial with Paul Pogba and Juan Mata playing centrally behind them.

United started the game passively but turned it on in the second half scoring two quick goals to go up 2-1.

And that’s when Mourinho got exposed.

The thing about playing a “let’s try to score more goals than our opponent” style is that you have to stick with it. A 2-1 lead probably isn’t safe and therefore you need to push for a third.

Looking at a one goal lead with 17 minutes to play, Mourinho reverted to his old self. Instead of keeping his foot on the gas, he went into his old “kill off the game mode.” Over the next 15 minutes he removed Mata, Martial, and Rashford, replacing them with Alexis Sanchez and defensive players Ander Herrera, and Andreas Pereira.

In his autobiography, Sir Alex Ferguson spoke about why his Manchester United sides always seemed to get that late goal when they needed it. He said often times his opponents would make it easy for him. If they were to replace an attacking player with a defensive player as they tried to protect their result, United knew they could send an extra player forward as there would be one fewer player coming back at them.

By taking off three attacking players and replacing them with two defensive players, Mourinho allowed Chelsea to do exactly that. Now he was inviting Chelsea to put United’s goal under attack, a goal that United struggles to defend. It shouldn’t have been a surprise that Chelsea eventually got their equalizer.

Three days later, Mourinho fielded the same XI at home against Juventus. Despite the attacking talent on the field, the team sat back at first. They played a very passive first half to the ire of fans and former players.

It was a very curious tactic for a few reasons. First of all, Juventus are extremely good defensively. They also have clinical finishers up front and don’t need a lot of chances to score. Once they have their goal, their ability to stay organized and smother teams is outstanding.

The key to that ability is organization. Once they have a lead, Juventus doesn’t take risks with the ball and if they lose the ball, they’re already in position to defend. The way to beat them is to pressure them and force them into mistakes. United sat back so much that when Juventus won the ball back, often times their defender would just stand still with the ball, because they knew United were more interested in re-organizing then they were in getting the ball back.

That’s where Mourinho got exposed again.

When United did have the ball, which was often in the second half, United couldn’t generate any sort of attack. Juventus sat back, inviting all the pressure onto them and United didn’t know how to break them down.

Early on it became very clear there were no tactics for the attack. When the team had the ball players not making runs. Forwards had their backs to the goal, no one made runs to create space. The team didn’t know what to do.

On the touch line, neither did Mourinho. The manager who is famous for making substitutions that change games didn’t make any changes. He simply didn’t know what to do. He was out of ideas.

After the match, Mourinho went back to his tired old trope where he criticized the board for not spending enough money. He claimed he couldn’t make any changes because he didn’t have anyone available. Alexis Sanchez wasn’t in the squad, but Mourinho wouldn’t mention that he chose to leave him out. He said he couldn’t play teenager Tahith Chong because he had never played before. Apparently, no one told him that there are many cases of teenagers scoring goals on their debut. In fact, Mourinho wouldn’t have had to look far to find one, his own Marcus Rashford scored twice on his debut!

Mourinho has never been a tactical mastermind when it comes to attacking. It was always easy to overlook this because his style won. Sit back, absorb pressure, and hit your opponent on the counter.

He’s now getting exposed because he can’t play that way at United. He’s devoting more players to help on defense because his defense needs help, but that leaves him not having enough players to hit back on the counter. That’s why he falls back on how United need to sign better players. That’s why they signed Alexis Sanchez in January. The hope that an individual moment of brilliance will be enough to create goals and hide Mourinho’s deficiencies.

The last two games have taught us a lot about Jose Mourinho. He’s trying to adapt to the modern game, maybe because he wants to or maybe it’s just to save his job. The only problem is he can’t, either because he can’t stop himself from reverting to old habits or even worse, he just doesn’t know how.