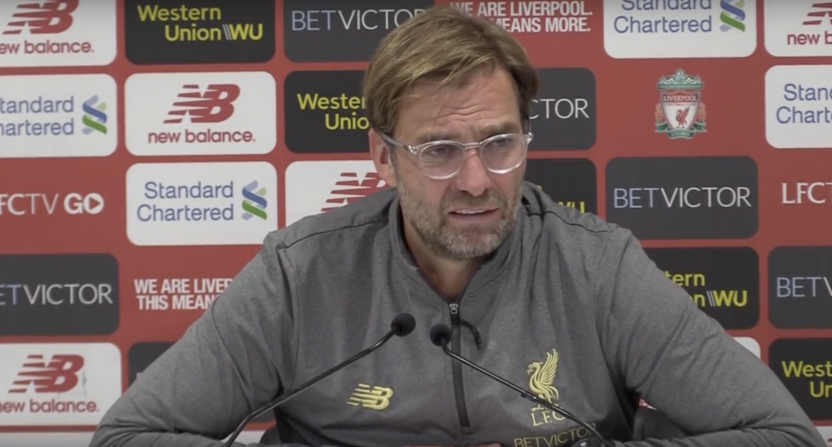 Last month we got our first taste of the UEFA Nations League, UEFA’s new ‘tournament’ designed to add a little bit of pizzaz to the otherwise typically drab international breaks that dredge the early part of the season. While it’s still too early to call the Nations League a rousing success, it’s hard to deny that the games it’s providing aren’t substantially better than what we used to get in previous international breaks.

But not everyone is a fan of the new Nations League. And this past weekend it was Liverpool manager Jurgen Klopp emerging as a very vocal critic, calling the Nations League a “senseless competition.”

“The boys, unfortunately, go away again now and have to play Nations Cup games – the most senseless competition in the world of football. And we hope that they come back healthy and play these easy competitions, the Premier League, the Champions League, and all this. It’s tough times for the boys, eh? But I said already in an interview we have to start thinking of the players.”

Klopp’s comments aren’t surprising and it’s likely he’s not alone in thinking this. Club managers lamenting over the necessary evil that is international breaks is a tale as old as time. But Klopp may have a legitimate gripe this time.

In previous years, qualification for the European Championships started right after the World Cup. Due to the setup of qualification, the bigger countries would typically be in a group with just one other “big” country and a bunch of substantially smaller ones. In a six team group, that would mean that just two of the 10 games would be difficult, and thanks to both the group winner and runner up advancing these days, how difficult those games would actually be is an entirely different question.

The Nations League changes that. Instead of England having a fall schedule featuring six games against Switzerland, Slovenia, Estonia, Lithuania, and San Marino*, they now have four competitive games against Croatia and Spain.

That’s a substantial difference. Even though those Euro qualifying matches are still technically competitive matches, the amount of level exerted in them is completely different. When those teams come to Wembley, it’s essentially a walk in the park for England, they play hard for about 20 minutes, and then just have to see the rest of the match out. Even when playing away from home, once you get past the travel, the on-field effort does not require much of an increase to get the required result.

Even though large chunks of players had to spend two weeks with their national teams, the international break did provide some semblance of a break as the games were never as competitive as league or Champions League matches. The Nations League changes that. Teams are taking it seriously and now instead of just going through the motions against Lithuania, England will be taking on Croatia, a much more even match for them. Add in that England will certainly be out for revenge following their World Cup semifinal loss at the hands of Croatia, you know the players are going to go all out.

As fans, this is great. We get to watch more competitive games, but Klopp’s biggest concern is simply about the players getting burnt out.

“But now you call a manager of any country and ask him to leave out one or two players and he says ‘but I am under pressure as well, because now it’s Nations Cup'” Klopp said.

This isn’t completely farfetched. The players just had the World Cup this summer. Klopp had several players making deep runs in the tournament, giving them very short summer breaks. We’ve already seen some star players pick up early season injuries, possibly due to not having enough off time.

The Nations League does offer some respite, maybe. Instead of six qualifiers over the six fall match days, teams only play four games, leaving each country with two open matchdays that can either be left open or have a much less competitive friendly.

If a team opts for a friendly, you would think that the manager could simply let players who didn’t play in the Nations League match play, or even call new players into the squad. But then last month, England manager Gareth Southgate subbed on Harry Kane for the final 30 minutes of a meaningless friendly, to the ire of every Tottenham fan. Why would he do that?

The answer to that question shows just how valued friendlies are in Europe. Where US Soccer uses friendlies simply for marketing and a chance to make money, European based managers are never more than two years away from a major tournament.

International managers only have four international breaks a season plus the summer to get ready for the next tournament. That’s why upon hearing Klopp’s comments, Germany manager Joachim Low defended the Nations League.

“For us, for me as national coach, the Nations League is a good invention. Because we play top nations, because it’s for something. It is a competition. That is sometimes preferable to me in this phase than to play against the really small countries.”

For Low, and all European managers, this time is crucial. Every match counts. After crashing out of the World Cup, Germany has to evaluate the direction that they want the team to go in. Playing games against San Marino, who Germany’s G team could beat, doesn’t help Low evaluate his squad and doesn’t help Germany get any better. Playing competitive matches against France certainly does though.

Ultimately, Klopp’s comments aren’t anything that should have caught anyone by surprise. Before every international break, there will always be a club manager that criticizes it. But this time Klopp did make you look at the other side of things. The Nations League may be a vast improvement to the international break, but could it possibly come at a very high cost?