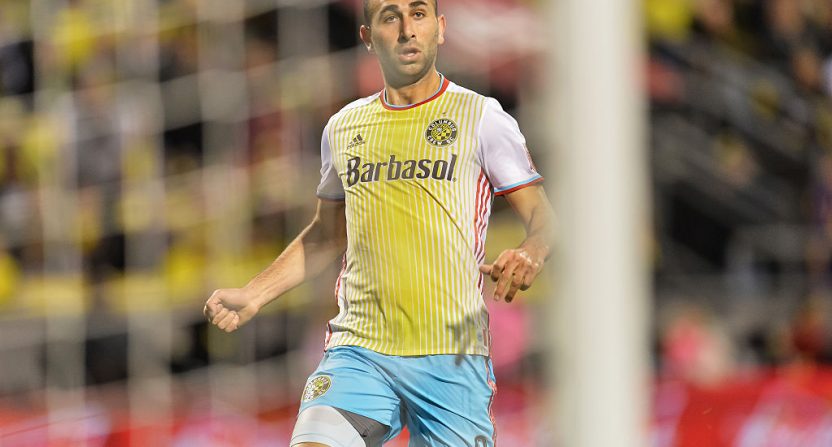 As a winger for the Columbus Crew, Justin Meram is one of the most fearless players on the pitch. He constantly takes on defenders and generally wins. Now he has to face a challenge off the field.

Meram is a dual citizen of both the USA and Iraq, but has decided to represent Iraq in FIFA competition. The former University of Michigan standout has represented Iraq before in plenty of matches (in fact, he has 22 caps with them).

But due to the travel ban, Meram will be missing a pivotal World Cup qualifier in fear of the potential repercussions. The matches — which will take place in Iran — are against Australia and Saudi Arabia. Those are crucial teams to defeat if Iraq wants a chance at the big prize.

The Iraqi Football Association put out a statement on Facebook, and a translation has been provided by Sam Fahmi:

“Iraqi national team technical director Basil Gorgis has confirmed the absence of our national team player, Justin Meram from the upcoming matches against Australia and Saudi Arabia in the first and second rounds of the deciding world cup qualifications round. Korkes added that the technical staff exhausted a considerable effort with Meram to change his mind about not coming to Iran due to the recent decisions by the American government with regards to it’s relations with the Islamic Republic. He (Gorgis) tried to point out to the player and his family that his entrance to Tehran will not affect his presence in America.

From the statement above, it looks like this was more on Meram’s fears than any actual action that will be taken. Since he is a U.S. citizen, his re-entry shouldn’t be an issue. Nonetheless, his fears are legitimate and any headache that could be caused here would be a distraction regardless. Not the best environment for someone to play in.

The Columbus Crew also released a statement in regard to Meram’s decision ahead of their match tonight against the Houston Dynamo:

“We are aware of the reports on Justin Meram’s status with the Iraq National Team. Justin will not be available for comment ahead of tonight’s match.”

Meram signed a long-term extension with the Crew this past week making him one of the highest paid players on the team. A milestone week for him has now been flipped on its head. Hopefully he’ll get an opportunity to represent his country sooner rather than later.