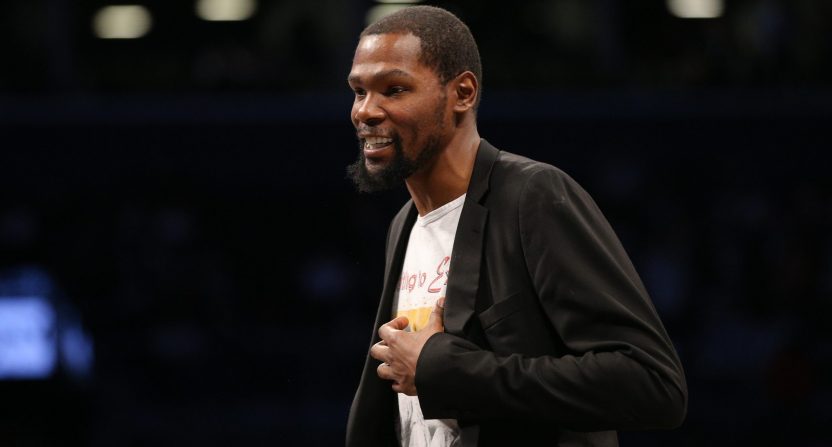 When you’re a pro athlete making millions of dollars, it’s important to look into the future and find ways to invest that money. A playing career is limited and it can be a tough adjustment for some to go from making millions to making nothing so finding new ventures while the money is rolling in can keep that cashflow coming in.

Brooklyn Nets forward Kevin Durant is doing just that and is getting into team ownership. According to Sports Business Daily, Durant bought a minority stake in the Philadelphia Union of Major League Soccer. A source told SBD that it’s between a 1% and 5% stake in the MLS team.

A stake that small probably won’t mean he’ll be too involved in personnel and business decisions but it’s still a win-win situation. Durant gets to have his foot in the door for team ownership that could possibility expand after his playing career is over. And the Union gets to advertise that a famous NBA player is a co-owner.

Many high-profile pro athletes and celebrities have gotten into soccer ownership in past years. Most notably, LeBron James has been a partial owner in Liverpool through a deal with Fenway Sports Group. His reported 2 percent stake in the team has reportedly gone up in value from $6.5 million to nearly $32 million as of 2018.

Within MLS, Houston Rockets guard James Harden bought a 3.5 percent stake in the Houston Dynamo and NWSL’s Houston Dash. Matthew McConaughey owns part of expansion team Austin FC. Seattle Seahawks quarterback Russell Wilson and singer/actress Ciara, along with Price is Right host Drew Carey, have a stake in the Seattle Sounders. And LAFC has a long list of famous owners including Magic Johnson, Will Ferrell, Mia Hamm, and Nomar Garciaparra.

Durant recently tried to buy an ownership stake into his hometown team DC United, which is co-owned by a minority owner of the Memphis Grizzlies. After a couple attempts, Durant seemingly moved on. It’s unknown if Durant’s investment involves owning part of the Union’s USL team or if this is going through his Thirty Five Ventures company but Durant is the latest in the growing trend of pro athletes taking on team ownership.