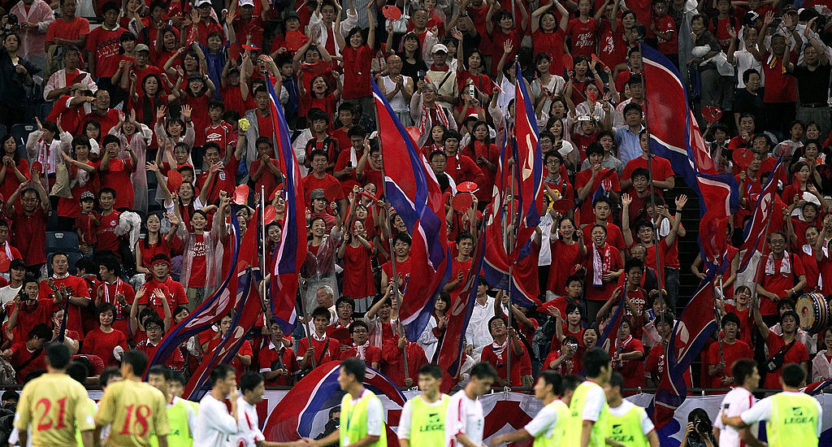 This is very unlikely to happen but for the sake of it, let’s entertain this scenario. South Korean President Moon Jae-in is suggesting a combined bid that includes North Korea for the 2030 FIFA World Cup.

In an ideal world, this would be a great thing to witness. Moon suggested this possibility as a way to create peace between the two nations who have been enemies for over 70 years. Sports is a way for countries to put aside differences and compete on the field rather than in war so in theory, this would be great for two countries to at least be civil with each other instead of a climate of unknown potential nuclear war.

In a practical world, there is no way that this couldn’t be a disaster. For one thing, even in a bid where multiple countries are hosting, you still need money to host the World Cup and that is something North Korea doesn’t have right now. North Korea puts a lot of their money in their military but they don’t really have much in anything else. And in a closed, communist society where they get most of their aid from China and even they’re hesitant about their relationship with North Korea, North Korea probably shouldn’t be hosting a World Cup.

Also, there is much more to a World Cup than just having the games. In the joint bid between USA, Canada and Mexico, they started planning things 10 years in advance. Assuming the relationship between the two isn’t going to change politically over the next few years, you’re going to have to rely on those two countries to work together to put forth a bid worthy enough to be chosen. And given tensions are in the peninsula, any sort of disagreement could make things worse.

But while this is an option, it’s very unlikely this will come close to happening. For one thing, FIFA would need to change the rule that states that confederations must wait two World Cups before bidding again (Qatar hosts in 2022). Another, while they haven’t produced a formal bid yet (because FIFA isn’t accepting 2030 bids yet), Argentina/Uruguay is the formidable favorite because it’ll be the 100th year of the first World Cup that was in Uruguay. Finally, China really wants to host the World Cup and they likely want to be a sole host. I would imagine they would like to bid in 2034 and would probably be more likely to host over a joint Korea bid. Maybe combining both bids give a possibility of both Korea’s hosting a chance but I doubt it.

And there’s a reason why I didn’t include the risk of fans of other nations visiting North Korea given their history of being incredibly protective and jailing visitors for any reason. That’s because given FIFA’s history, I don’t think that’s relevant info to them. Look who is hosting in 2018 and 2022 and decide if that is relevant to FIFA.