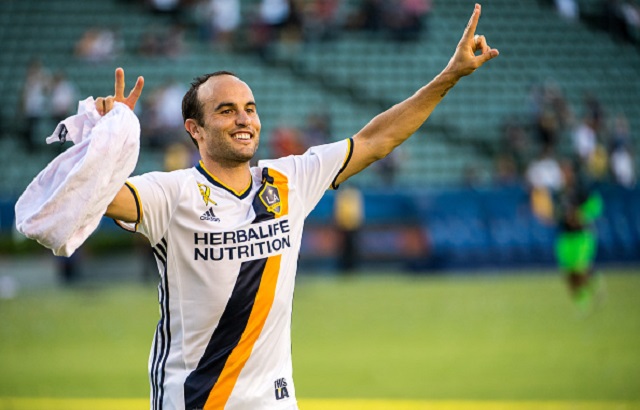 Landon Donovan is back – yay!

That, more or less, was the sum of national opinion when it emerged that the U.S. men’s national team and Major League Soccer’s all-time leading scorer would be coming out of retirement to finish out the season for the Los Angeles Galaxy – and perhaps more.

For all our talk of legacy and going out on top and all that other stuff, we quite enjoy getting another chance to see a legend in action. Especially one who retired at 32 and, now 34, should still be something resembling his old self.

Donovan’s actual return to the field for the Galaxy on Sunday in a 4-2 win over Orlando City, in which he stumbled along for the final seven minutes, was loudly cheered by the club’s fans and the soccer community as a whole. But while having him back is lovely and sates our melancholy, it also poses a pressing question.

The Galaxy are in the business of winning soccer games. And their manager, Bruce Arena, architect of three championships in the last five years, is a pragmatist. They didn’t bring Donovan back out of some yearning for the past. This isn’t an emotional signing. And this almost certainly isn’t commercially driven either. Sure, Donovan will sell some jerseys with his new number, 26, and draw more people through the gates for however long this lasts. But this was a soccer decision.

“It makes you realize that it’s a whole different level.” @landondonovan reacts to his return to the field. https://t.co/HGWyLoAvAJ

With Gyasi Zardes, Steven Gerrard and Robbie Keane all out injured, the team needed an attacker. Donovan had indicated that he might be interested in making a return.

It’s sort of disconcerting that in almost two years away, Donovan wasn’t made obsolete by the next generation of players. Certainly, he was quite likely the greatest American soccer player ever – male, anyway – but if youth development is really picking up the way it’s said to, why wasn’t there someone standing at the ready when Zardes, Keane and Gerrard all went down, blocking the way for a Donovan return?

This is how veterans retire: they sense their time is up, because somebody younger and hungrier and less sore the morning after a game is muscling them out. That’s not how Donovan retired. He was sick of being a soccer player. And now he apparently isn’t sick of it anymore, and there still isn’t anybody to stand in his way.

That this should happen on the Galaxy is noteworthy in its own right. The club’s academy has probably been outperformed by that of FC Dallas in terms of first-team yield, possibly because a more frugal FCD isn’t a habitual customer on the market for famous foreign veterans like the Galaxy is. But it nevertheless has a slew of promising young players in Donovan’s winger/attacking midfielder/second striker positions in its pipeline. Why didn’t Jose Villareal step into the breach? Or Bradford Jamieson IV? Or Raul Mendiola?

As the new World Cup cycle has gotten going, U.S. national team head coach Jurgen Klinsmann has been asked multiple times why he still relies so heavily on his veterans. Why do Kyle Beckerman, Jermaine Jones, Clint Dempsey and Chris Wondolowski – aged 34, 34, 33 and 33, respectively – still routinely make his rosters when there’s every chance they won’t be useful at the 2018 World Cup anymore?

Well, Klinsmann has said again and again, nobody has come to take their spots. Nobody has staked a claim. For all the young players coming through and garnering buzz, only a tiny fraction actually sticks and takes a job. It’s up to them to shove the older players out of the way, Klinsmann argues reasonably, not for him to do it on their behalf. Soccer is a Darwinian meritocracy. Your job is yours until somebody takes it from you.

This is much the same dynamic, or lack thereof, at work in the Donovan situation.

In his return, he was gassed within a few touches. It’s a safe assumption that he’ll get back up to speed in fairly short order. But in his current state, with some recently grown flab encasing his once-chiseled abdomen, he has no real business on a professional soccer field.

Yet there he was. Because no young player embarrassed him in practice to the point where it was apparent that Landon Donovan was a great from the past who should be left there.