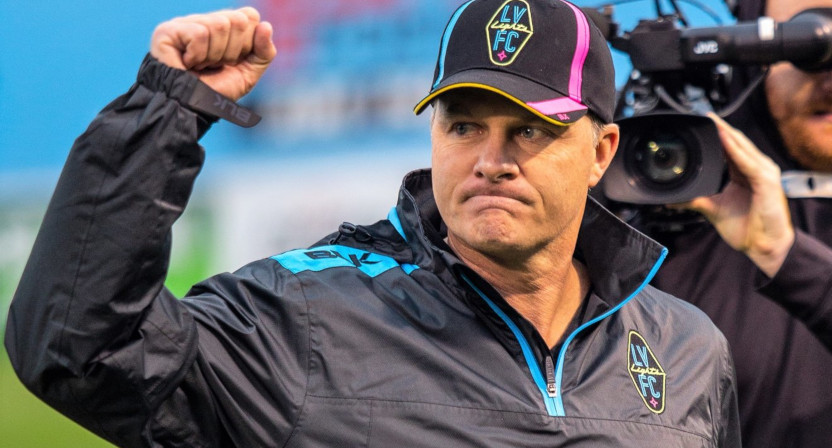 The USL Championship may be coming back, with both ESPN’s Jeff Carlisle and The Athletic’s Jeff Reuter reporting Wednesday that the league and the USL Players Association have struck a tentative agreement to return to play in July. But one person who won’t be back, at least with his current team, is Eric Wynalda. The former U.S. international and long-time Fox Sports commentator has been the head coach and technical director of Las Vegas Lights FC since October 2018, but the team tweeted Wednesday that they’ve parted ways with him:

Thank you @lvlightsfc – miss ya already

Beyond the strangeness of firing a coach when there’s no current season (and when a new season seems just on the horizon), this came only a few days after Wynalda announced he was taking a Twitter hiatus to focus on his job:

Hello all-so I will be taking a Twitter hiatus My reasons why are very simple. I’m going to focus on my job and my family. Twitter has become a distraction and to be quite frank I just don’t think I’m utilizing my time appropriately by engaging anymore – be safe out there

And it came less than a week after the team Twitter account wished him a happy birthday in very dramatic fashion:

While the Twitter account manager obviously isn’t making the calls on whether to fire Wynalda or not, it’s quite something to see the team’s public statements go from “LEADER, MENTOR, COACH, FRIEND, LEGEND” to “no longer head coach” in a week, especially with no rationale for that firing provided.

We’ll see what’s next for Wynalda, whether that’s in coaching or in a return to broadcasting. And we’ll see where Las Vegas Lights FC goes from here. But suddenly firing your coach when you haven’t played a match since March (the season started then, but most teams, including Las Vegas, only played one match before the season was suspended due to COVID-19; Las Vegas managed a 1-1 draw against San Diego Loyal SC) and when you’re about to ramp up to a resumption of play is certainly curious timing.