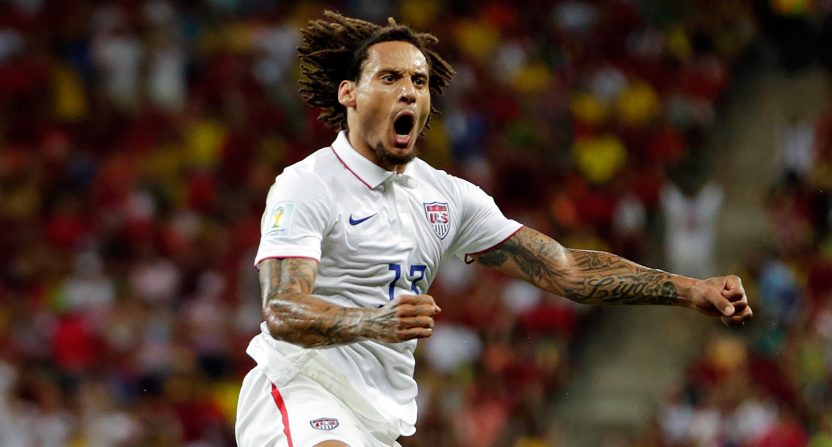 During the USMNT friendly vs. Mexico I got a text from a buddy of mine saying asking the following: “If you could pick any USMNT member in history, take them at their prime, and put them on this team for the next World Cup cycle, who do you pick and why is it Jermaine Jones?

Now to me, the answer may not obviously be Jermaine Jones but he’s easily one of the only two players I’d consider with the other being Clint Dempsey. I guess choosing between the two ultimately comes down to what area of the team needs more addressing, scoring goals or central midfield. But the reason that its between those two players is simple. When wearing the US shirt, no two players had more heart and put in more effort than Clint Dempsey and Jermaine Jones.

Earlier this month, Clint Dempsey announced his retirement from soccer. The announcement was greeted exactly how you would expect it to be. Social media blew up, fans reminisced about his greatest moments, US Soccer released a tribute video, and most importantly the official US Soccer supporters group, the American Outlaws, pledged to honor ‘Duece’ at the upcoming friendly against Brazil.

On Friday, merely hours before the United States kicked off against Brazil, Jermaine Jones announced his retirement. The reaction was a bit different. Fans put out their thanks and accolades on Twitter for the German-American, but it was noticeably less than what Dempsey got. US Soccer put out a tribute video, and while the American Outlaws did the same, there were no plans to honor Jones at the US friendly vs Mexico four days later.

I’ve never met Jermaine Jones so I can’t say this is the way he would have wanted it. What I can say is that the lack of celebration toward Jones juxtaposed with the outpouring of love for Dempsey was the perfect parallel for Jones’ national team career.

When all is said and done, Jermaine Jones may go down as the most under-appreciated player in USMNT history, a player who did all the dirty work and rarely got the thanks he deserved.

Jermaine Jones has been a steadying presence and a voice of reason since he joined the #USMNT setup nine years ago. American soccer is markedly better off because of him and he should be recognized as one of the most important players of this generation. https://t.co/cK0oIQPFeF

Born in Germany, Jones chose to represent the United States after appearing in three friendlies for Germany (this was before Jurgen Klinsmann came in and actively recruited German-Americans). Sure you can say he chose the US because he realized he would struggle to get into the German team, but what you can’t deny is the player he was.

At the time of Jones’ switch, he was a first choice midfielder for Schalke. An injury cost him a chance to represent the US at the 2010 World Cup. After struggling to regain his fitness the following season, Jones was loaned out to Blackburn in the Premier League where he walked into the starting XI. Upon returning to Schalke, he was back to anchoring their midfield for the next few years as they competed in the Bundesliga, UEFA Cup, and UEFA Champions League.

Over the past few years, there have been plenty of people who questioned how devoted many of the US’ dual-national players were to the United States. Make no mistake that was never directed at Jermaine Jones.

From the moment Jones pulled on a United States shirt, you would never be able to tell that the US may have been his second choice for who to represent. Jones brought an intensity that the US was missing. He flirted with the line of too extreme better than most players in the world.

Fans will never forget the goal that Jones scored against Portugal in the 2014 World Cup, but why isn’t Jones’ career looked back more favorably? It really comes down to bad luck.

When Jones made the switch to the USMNT, the spotlight was centered on Landon Donovan, Clint Dempsey, and up and coming central midfielder Michael Bradley. Jones missed the 2010 World Cup with an injury, a tournament that served as de facto coming out party for Bradley.

Bradley would then become the face of the US midfield, for good reason, with Jones slated to be his partner.

But the Jones/Bradley partnership never really got off the mark. Their games just didn’t mesh. With the US liking to play a 4-4-2 (which got the best out of striker Jozy Altidore) Jones and Bradley’s game didn’t fit the formation. Bradley was a player that liked to make late runs forward. Meanwhile, Jones was a great ball of energy who liked to run around causing disruptions for the opposing midfield. While both are great qualities, they often left the US defense exposed.

Prior to the 2014 World Cup, then manager Jurgen Klinsmann wanted to build his team around Bradley, but it was Jones who was easily the team’s best midfielder over the course of the tournament. Following the tournament, it seemed logical that the US would be trying to replace Jones, who was 32, for someone younger, but Jones refused to relinquish his place. At the 2016 Copa America, he was once again their best midfielder. When Jones took a bad red card and was suspended for the semifinals against Argentina, the US lost their chance of scoring a major upset.

As the US turns to youth, there’s a new effort being made to find talent. We have Christian Pulisic but who will be the next Clint Dempsey or Michael Bradley? Who will take over the burden of scoring goals?

Despite all that, perhaps it’s more important that the US should be looking for the next Jermaine Jones. The man who did the dirty work for his team and never asked for thanks. The man who may have seemed quiet but was the rock of the US midfield.

It’s rare for a player with just 69 caps to be so important for such a long time, and it would be even rarer for a team to have a large retirement celebration for him. Then again, Jermaine Jones is a very rare player who deserves all the praise and then some. But maybe him retiring quietly in the shadow of Clint Dempsey is exactly how it should have gone.