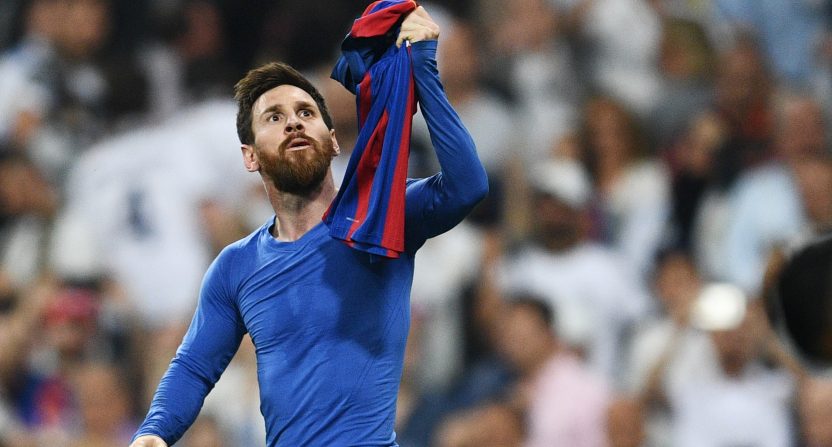 There was no shortage of drama at the Santiago Bernabéu today, when Real Madrid and Barcelona met for the season’s final El Clasico.

Madrid came into the match with a three-point lead over their long-time rivals, but Lionel Messi’s 500th career goal saw Barcelona leapfrog Madrid to top the table.

The two sides came into today’s match with opposing fortunes. Real Madrid had knocked off Bayern Munich during the week, while Barcelona was kicked out of Europa by Juventus. Real Madrid had the chance to cement their position at the top of the league and put a dagger in Barcelona’s title charge.

The match turned out to be an instant classic, and it looked good for the hosts early. Casemiro opened the scoring before the half-hour mark when he pounced on a Ramos shot that bounced off the post. It wasn’t a pretty goal, but it came to symbolize the differences between the two sides today. Real Madrid played a gritty game, while Barcelona tried to be far more elegant.

Barcelona’s elegance showed a few minutes later. Messi, with only two touches, cut through Madrid’s back line and leveled the score. The goal was the 499th of his career. Madrid looked bewildered by the Argentine’s run that started about 40 yards from goal. A well worked passing play by his teammates fed Messi at the top of the box. The four-time Ballon d’Or winner did the rest.

The score would remain the same until the second half. As the match wore on, Barcelona looked stronger and stronger, but they couldn’t find a way to beat Keylor Navas. The Costa Rican made some outstanding saves over the course of the 90 minutes. His German counterpart, Marc-Andre Ter Stegen, also played well, making one terrific save on compatriot Toni Kroos. Madrid’s best chance, however, fell to their superstar. Cristiano Ronaldo had a chance to make it 2-1, but missed an open net on the counter attack. Ronaldo fell to the ground in frustration, he would be held scoreless all night.

With Barcelona resisting Madrid’s occasional attacks and pressuring more and more the Catalans needed something special to beat Navas. Ivan Rakitic answered the call. The Croatian midfielder scored his seventh goal of the season with a masterful shot from distance that Navas had no chance at saving. Rakitic has always been able to finish those kinds of shots from distance, and Barcelona now had their lead.

Things took a turn for the worse for Los Blancos, as minutes after going behind 2-1, Sergio Ramos dove into a reckless two-footed challenge on Messi and was shown a red card. Madrid would have to play without their best defender and frequent late-game hero. Even more concerning is the subsequent ban he’s facing. Madrid is facing a serious center back problem with Pepe and Raphael Varane sidelined with injury. At the moment, however, they were more concerned about trying to get back into this game.

James Rodriguez was brought on after the Ramos sending off, and for a time it looked like he would play the hero. The Columbian international snuck in unmarked and got on the end of a Marcelo cross to level the game with five minutes remaining. Zinedine Zidane’s gamble to bring on an attacker down a man seemed to have paid off.

With the match headed into the final minutes, it looked like Madrid would hold onto their 3 point lead at the top of the table. But in the dying moments, Messi had one more “magisterial” moment in him. Before lauding Messi for a stunning moment, we should take some time to give credit to Sergio Roberto, who’s run through the Madrid midfield made this dramatic finish possible. It may have started with Roberto but it was Messi who silenced the Bernabéu. It was his 500th career goal, and there are few grander opportunities to score such a milestone as El Clasico.

Hay Liga!#Messi racks up his 500th career goal. Oh, and it just so happens to settle the best #ElClasico in a long time! pic.twitter.com/ZvF5mxrCG0

Barcelona’s win now sets up a dramatic finish to the La Liga season. Madrid and Barcelona are now level on 75 points, but thanks to the head to head tiebreaker, Barcelona is currently in first. Madrid still has a game in hand on the Catalans, which now looks like a must-win. There is little room for error on either side now, as any dropped points could lose the title.

Today’s El Clasico would be remembered on its own as an incredible game of football. Coupled with the dramatics of the title race and Messi’s personal milestone, this one is one for the history books.