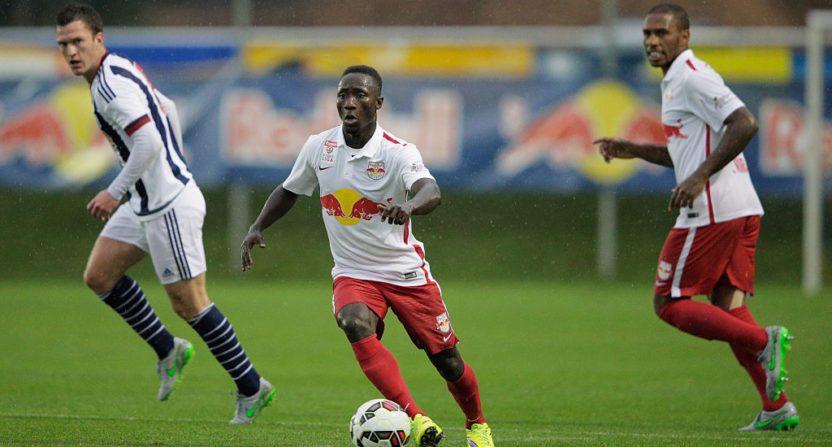 While we were sleeping in the United States, Liverpool announced that they broke their transfer record by signing 22-year-old midfielder Naby Keita for just slightly over £50 million ($64.8 million). Liverpool broke their transfer record earlier this summer by signing Mohamed Salah and if they get their way, Liverpool may be breaking their record twice again with Southampton’s Virgil Van Dijk and Monaco’s Thomas Lemar.

The twist with the Naby Keita deal is that Keita isn’t donning Liverpool red until July 2018 as he remains in Leipzig for the remainder of the 2017-18 season. While that might seem strange breaking your transfer record for a player who you can’t have until next season, it’s great business out of Merseyside.

For one, let’s forget about the notion that £50 million for a starting midfielder is a lot of money. In this new era of transfers, it’s not impossible but it is going to be rare to find a starting player for less than £50 million now so if you’re serious about making a title run and making an impact in Champions League, you better pay up. Also, with the British Pound getting weaker and weaker compared to past years, £50 million in 2017 literally isn’t worth as much as £50 million five years ago. So dealing with any other European country, which uses Euros, you would need to offer more just to compensate for the conversion rate.

And despite Liverpool breaking their transfer record, they got a bit of a discount from Leipzig for waiting. Leipzig wanted more money but considering they are entering their first ever year in Champions League, they probably can’t afford to sell Keita this late in the transfer window and find a replacement in order to not be cannon fodder in the Champions League. Leipzig have an easy group where they could legit make the knockout stage. That goes away without Keita so they were willing to take less in order to keep Keita for a year to be able to find a replacement and then sell him to Liverpool.

Liverpool, on the other hand can afford to keep Keita at Leipzig for another year. While Liverpool won’t admit this, Keita probably will be Philippe Coutinho’s replacement and if Liverpool is true to their word and isn’t selling Coutinho this summer, they can sell Coutinho next summer after the World Cup and won’t be weak at the midfield position.

Last, but not least, Keita has a £48 million release clause. Knowing Leipzig isn’t keen on selling Keita now, they were willing to take slightly more money from Liverpool to wait and sell him next year, Liverpool guarantees they get their player and neither of them risk losing out on Keita or having a team lowball and match the release clause.

So while this deal seems unorthodox and looks bad on all fronts, it in fact sounds like a pretty good deal for all involved. Liverpool will be getting a 23-year-old midfielder who they can develop into a world class talent. And Leipzig gets a year to look for their Keita replacement and keep up their march to try and defeat Bayern Munich for the Bundesliga.