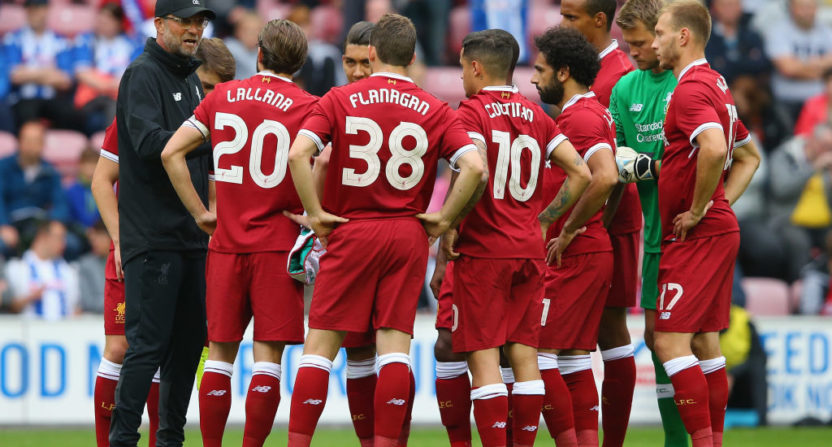 While the Champions League technically got underway back in June, this week sees proceedings really kick off. Twenty teams are vying for the final 10 spots in the upcoming group stages. This week, the final round of qualifying begins. Many of the clubs featured are small clubs from places like Cyprus and Kazakhstan.

In addition to those small clubs, each major league has one representative in this playoff round. On many occasions, teams from England, Spain, Italy, and Germany are drawn against a relative minnow. It makes for a fairly straight forward qualification. However, once in a while we get treated to something much more enticing. This year, we have Liverpool vs Hoffenheim.

The official result of the #UCLdraw ?

Compared to a club like Real Madrid, Hoffenheim is actually a minnow in the grand scheme of things. With barely a population over 3,000 people, the small village north of Stuttgart hardly seems like a likely host for Champions League nights.

Conversely, Liverpool — a city of nearly half a million and five-time winners of the European Cup — have been here many times before. Liverpool is desperate to get back into the Champions League group stage, but the draw with Hoffenheim will not be an easy task. Hoffenheim just enjoyed their best season in club history, thanks in large part to young manager Julian Nagelsmann.

Nagelsmann is a lot like his counterpart Jurgen Klopp. Both men are terrific motivators and adept at getting their teams to play as a unit. This matchup is very much a battle between two of Europe’s most popular managers. But who has the upper hand?

Liverpool has the more expensive squad, that should go without saying. Philippe Coutinho isn’t likely to be in Barcelona by Tuesday so he alone is valued more than the whole of Hoffenheim’s squad. From an attacking standpoint, Liverpool is the clear favorite. Coutinho, Roberto Firmino, Mohamed Salah, and Sadio Mané should trouble Hoffenheim’s defense. Hoffenheim’s best defender from a year ago now plays for Bayern Munich.

To put it plainly, Liverpool should be the favorite here, but that is unlikely to help Liverpool fans sleep soundly. Hoffenheim is a good team. Despite losing Nicholas Süle to Bayern they have plenty of weapons that can hurt the Reds. Most notably from set pieces. Last year, Hoffenheim were set piece wizards, scoring 16 times from dead ball situations. They may have lost their set piece maestro Sebastian Rudy, again to Bayern, but they should still be dangerous enough to trouble Liverpool’s rickety defense.

Adding Serge Gnabry on loan gives the German side another outlet in attack, along with classic poacher Sandro Wagner. Their attack should be improved, and if Süle’s loss doesn’t prove to be an issue, this could have the makings of an upset. Hoffenheim’s defense allowed the second fewest goals last season.

Hoffenheim will likely let Liverpool come to them, and it will be up to Klopp to find a way through the opposition. A high scoring affair will likely benefit the English side, so expect an early surge from Klopp and his men.

On Wednesday, Italian side Napoli will be taking on OGC Nice. Napoli, never a favorite to win the Champions League, is always a dark horse. Fan favorite Marek Hamšík has now been with the club for a decade. The Slovakian has never been pried away from Napoli despite plenty of outside interest.

The interesting story here is that of Nice, however. The French club from a town just west of Monaco has never participated in the Champions League. They did compete in the European Cup, however, but not since 1960 when they lost to Real Madrid. Led by a pair of former Champions League winners, Dante and Wesley Sneijder, Nice is looking to make club history. Only losing 4 matches in 2016-17, this side needs to get over one last hurdle before reaching the cash cow that is the Champions League group stage.

Nice also feature striker Mario Balotelli. The Italian scored 15 goals in 23 appearances for the club last year. He’ll have to play a crucial role if they hope to advance.