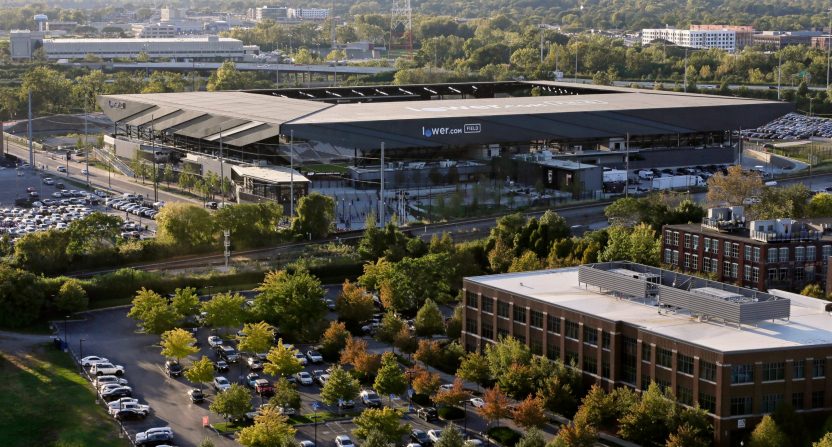 The last time I visited Columbus, I went to a Crew game at what was then called MAPFRE Stadium (now Historic Crew Stadium). At that time, it was the farewell year as Anthony Precourt was set to move the team to Austin.

Talking with Crew fans at the time, they were hopeful as they were in an ongoing fight to #SaveTheCrew. However, at the same time, there was a sense of realism that though they were fighting such an uphill battle that this might be it. It was like a combination of optimism and depression within a fanbase that was the first to embrace MLS.

Three years later, I came back to Columbus to check out a new Columbus Crew with a new owner, a new stadium, a new trophy, and a revitalized fanbase who quite literally saved their team.

Last month, I went to the Crew’s game against CF Montreal and the first thing I noticed about Lower.com Field is that it’s smack dab in the middle of the city. Right in the Arena District, Lower.com Field is situated within walking distance from a variety of bars and restaurants and is next to Nationwide Arena (home of the Columbus Blue Jackets) and Huntington Park (home of AAA’s Columbus Clippers).

One criticism people seemed to have about Historic Crew Stadium was the location. There wasn’t much to do around the stadium and it was somewhat out of the way. I’m going to be honest, after attending MLS games in Kansas City (a 20 minute drive from Downtown), Philadelphia (driving to Chester), and Harrison, NJ (a 60-90 minute train ride from Manhattan), Historic Crew Stadium was far from having the most inconvenient location for an MLS stadium. That being said, Lower.com Field is a massive improvement and I was able to spend a nice Saturday in the city before walking to the stadium that night.

The stadium itself has a bit of a minimalist feel but “minimalist” doesn’t mean cheap. Lower.com Field has everything fans could want without feeling like it’s too much. There is a diverse selection of beer and food throughout the stadium, which includes the Beer Garden that’s situated behind the Nordecke section.

One great feature of Lower.com Field is the seating. Safe standing sections have become more of a staple in newer MLS stadiums and Columbus incorporated that with their own stadium. Unlike the dangerous terraces in European soccer from generations ago, this version of standing-room only seating has seats but can be slotted out of the way from fans so they can stand and avoid overcrowding.

Not only is the Nordecke safe standing, but their supporters section is steep. There is a 37 degree rise in the Nordecke, which is the steepest in MLS and is the same incline as Borussia Dortmund’s “Yellow Wall.” This not only results in fans being on top of the action but when combined with a metal roof the chants from the Nordecke are louder and are contained within the stadium. From the other end, I was sitting in the 200 section and while I sat in the upper deck, I felt pretty close to the action. There really isn’t a bad seat in the house.

Overall, I was impressed and there wasn’t really much to criticize about the stadium. The only remote inconvenience I had was that I went to the team store to buy a Crew kit and they weren’t available. In fact, new Crew kits are a rare commodity because the team changed their name and crest earlier this year and due to fan backlash from the name change, the Crew reverted back to the original “Columbus Crew” name while keeping the new crest (only replacing “SC” with “Crew” on the bottom). Issue is, a lot of lead time is required for team merch so when the crest immediately changes due to fan opposition, it’s not a surprise that there aren’t any kits with the new crest because the team wasn’t expecting that. So while there is a perfectly good reason for a lack of kits, it was a bit of a bummer.

As Columbus welcomes the U.S. Men’s National Team on Wednesday, they will enter a new era. The tradition of playing Mexico might be over but it should still be a full stadium against Costa Rica. Lower.com Field is a reality because of the fans. Rich people may have bought the team and built the stadium but it was Crew fans that kept the team in Columbus in the first place and gave everyone a reminder that Columbus is a soccer city. Lower.com Field is a reward for Crew fans who saved their team and they’ll enjoy this stadium for years to come.