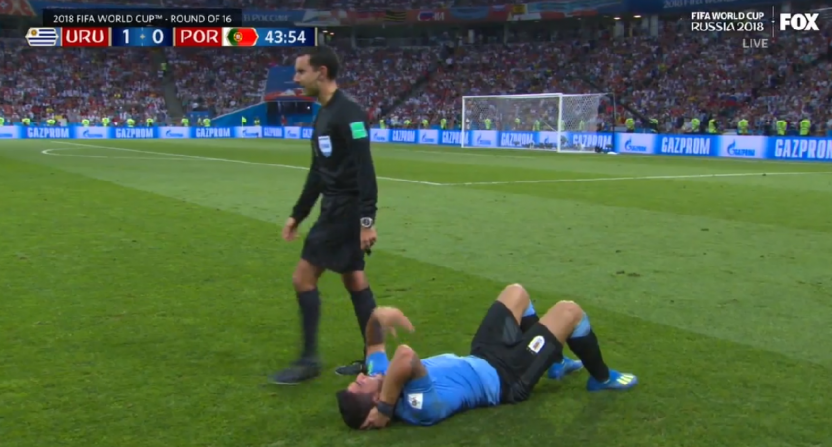 Portugal and Uruguay are tied 1-1 in the second half of their round of 16 match, and while Portugal just equalized via a Pepe header, the first half was a one-sided affair. Uruguay looked very much like a better team, but obviously Portugal can’t be counted out thanks to Cristiano Ronaldo and his wonderful thighs.

At this rate Ronaldo might just take the shorts off completely for his next free kick pic.twitter.com/ZAGVgWLUim

Aside from Ronaldo’s physique, the hero of the first half was Luis Suarez. Of course, as usual, he was also the villain of the first halfWhile he didn’t bite anyone this time, he did manufacture two moments that highlighted the highs and lows of the Luis Suarez experience.

First, there was his impossibly inch-perfect cross to Edinson Cavani on Uruguay’s opener.

Here are a few replays. That ball is sublime, and credit Cavani for finding a way to get the ball into the goal, no matter which body part it comes off of.

And here’s the Telemundo call, because it’s always more fun:

So that’s the good. The bad came later, as Suarez dipped into his “Chris Paul but dirtier” bag of tricks to undercut a Portugese defender going for a header. He pulled the move earlier in the half and earned a foul; here, he attempts to draw a card by, well, acting as though he’d been struck in the skull with a tire iron.

The ref didn’t award a foul, either because he saw what happened clearly or because he just assumed Suarez was embellishing. Play continued and Portugal won a corner at the other end of the field, all while Stuart Holden wondered why the game hadn’t been stopped for a head injury. It’s almost like that’s what Suarez was hoping to have happen!

Here are the replays, which showed absolutely no head contact:

Sure, there’s contact to Suarez’s back, but he initiated it with the back-in move, and then went down clutching his head in an effort to draw a card or worse, then stayed down in an effort to force a stoppage in play and derail the Portugese break.

We’ll see whether that particular karma comes back to, uh, bite Suarez as the game heads towards what could be a fun finish.