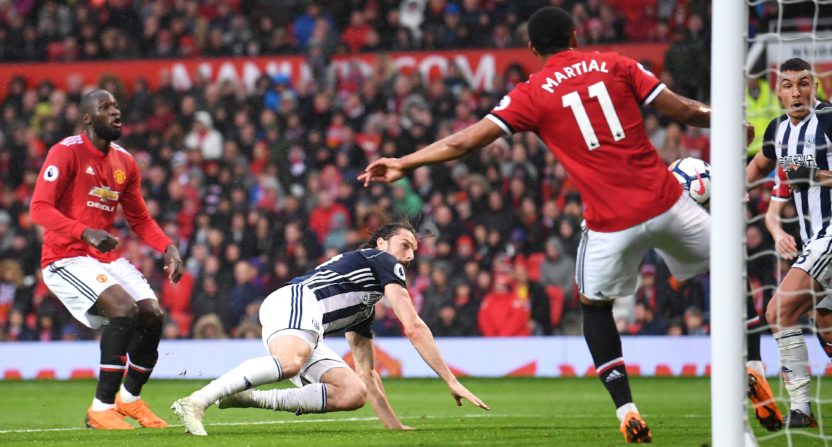 It wasn’t exactly the way Manchester City envisioned it happening but thanks to an unlikely ally, they have won the 2017-18 Premier League title. West Brom, the last place team who is bound for relegation, got some late season happiness by beating Manchester United 1-0 at Old Trafford.

West Brom became a team who was a constant thorn in the side of United all game long. They defended tight and conceded possession to United, two things that wouldn’t be surprising when a lower league team faces a top team. But what was different was that West Brom got legit chances on goal all game and picked their moment to make United pay.

That moment came in the 73rd minute when Jay Rodriguez finished off a wayward header by United’s Nemanja Matic on the corner. After that, West Brom used up the final half hour and got the win.

This could be the goal that wins the @premierleague title for Manchester City. @WBA are beating Manchester United! pic.twitter.com/2w971yIhlg

The West Brom win wasn’t without controversy. In the 18th minute, Craig Dawson took down Ander Herrera in the box. While United players were wanting a penalty, Paul Tierney wasn’t having it. The consensus was that it was a penalty and not calling that certainly changed the complexion of the game.

Postgame, Manchester City had a subtle dig at their red rivals by claiming “Our time. Our City.” West Brom went with a simple “You’re welcome.”

Our Time. Our City.

Regardless of the score, nobody was really worried about Manchester City losing the title at this point. Even if United had won, they would have been 13 points behind with five games to play and a City win at home to Swansea would have sealed the title.

So in a way, after not being able to clinch the title last week against Manchester United and getting eliminated in the Champions League by Liverpool, clinching the Premier League without playing will seem bittersweet. But while they won’t have that moment of camaraderie in getting a result of winning the title, they still get the trophy at the end of the day.