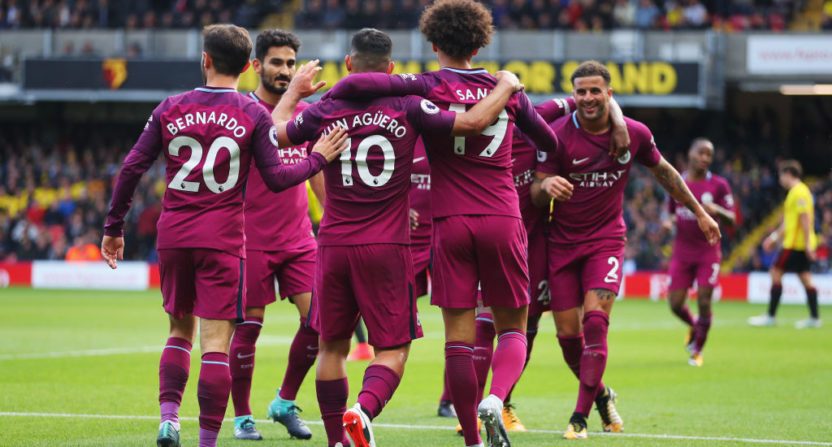 When Pep Guardiola arrived at Manchester City, many expected the Spaniard to catapult the English side straight to the summit. As he had done before with Barcelona and Bayern Munich, Guardiola was now going to conquer England.

The reality turned out to be much different. Guardiola’s side struggled. City battled to stay in the top four in England, eventually finishing third. The club was knocked out in the round of 16 of the Champions League, Guardiola’s earliest exit in that competition. In fact, Guardiola’s first year with City was the only time in his coaching career that he failed to win any silverware.

Guardiola’s issues last season came down to the club’s aging squad, not because Guardiola couldn’t handle the Premier League. As a result, the club spent large sums of money this summer in an effort to give Guardiola the squad he wants. After a few weeks into the new season, it looks like things are paying off. All of this started with new fullbacks.

New fullbacks making all the difference

Manchester City spent nearly £100 million on Kyle Walker and Benjamin Mendy this summer. The fullbacks have allowed Guardiola to field a team that is much more comfortable with his style of play. If you’re not familiar with Guardiola’s style by now, it’s one that relies heavily on possession.

Guardiola uses his fullbacks in a variety of ways, but a key to the position is the ability to get central and win the ball back when needed. This also forces the opposition to bring in their wide players to avoid getting outnumbered in the middle. As a result, Guardiola’s wide attackers have less defensive responsibilities and can create more danger. It’s a Rube Goldberg Machine of tactics where the fullbacks get the ball rolling.

Last season, Guardiola had Bacary Sagna and Aleksandar Kolarov to play fullback. Both players, north of 30, lacked the fluidity Guardiola wanted and as a result, City was unable to really dominate teams in a fashion consistent with Guardiola’s style of play. Now with Mendy and Walker, City have the kind of team that can play a very fluid style that dominates possession. The club has gotten off to a flying start this campaign, and the last three matches have laid down a marker for the rest of the league, and Europe.

City has won their last three matches by a combined score of 15-0. Two league wins and a Champions League win have spirits riding high at the Ethiad. With the new fullbacks, many of City’s star players have been able to find success that eluded them last year. Kevin de Bruyne has turned into one of the League’s best deep-lying playmakers. He spent time against Watford this weekend picking apart the defense and frequently launching attacks. The Belgian assisted on Sergio Aguero’s opener and City didn’t look back.

City’s newfound fluidity has allowed players like de Bruyne and David Silva to have more time with the ball and find those perfect passes. When Walker and Mendy push forward to create a front five, for instance, opposition defenses will often sit deep. This allows de Bruyne multiple outlets along with plenty of time to make a decision.

Getting the most out of the front three

Another problem Guardiola faced last year was his somewhat ineffective front line. Gabriel Jesus didn’t join until January and before that, newcomer Leroy Sane struggled to adapt to his new surroundings. A big problem, however, was the poor build-up play. With Sagna and Kolarov struggling to integrate into Guardiola’s system City struggled to score in big games. Against the smaller clubs they had little trouble, but against teams like Chelsea their attack was very static. Now with players that fit Guariola’s mold, City frequently look dangerous, even against some better clubs.

Aguero has been in tremendous form this season. It looked like the Argentine was headed out of City, but since the start of the campaign, he’s already found the back of the net five times in four appearances. Playing alongside Jesus and Sane at times gives Guardiola a front three capable of playing multiple positions. With Raheem Sterling occasionally joining the fray, City has a forward group that has scored 16 goals so far. Again, this all comes back to the fullbacks.

Guardiola now has better passers that can stay wide and get in crosses. The fullbacks can also drift in and create passing triangles to pull players out of position and create overloads. All of this makes for a club that’s hard to defend against.

City winning 6-0 against Watford will raise a few eyebrows, but Guardiola’s demolition of Liverpool the week before will really get the league’s attention.  Guardiola showed flexibility in a 5-0 win against the Reds and displayed similarities to Guardiola’s first league meeting with Jurgen Klopp in 2013. City played direct and countered Liverpool’s pressing with a press of their own, forcing Klopp’s team into making mistakes. Aguero opened the scoring quickly after Liverpool lost the ball. Things went downhill for Liverpool after that when Sadio Mane was sent off.

There is still a long season ahead. City has to maintain their style of play in the face of stiff competition. Their main rival looks like it will be Guardiola’s longtime nemesis, Jose Mourinho. Things could go pear-shaped for City if injuries (a common problem with Guardiola’s teams) start piling up or if the club becomes too complacent. But if Guardiola can keep Manchester City focused, and playing well, things could be awfully rosy in Manchester this May. Blue roses, naturally.