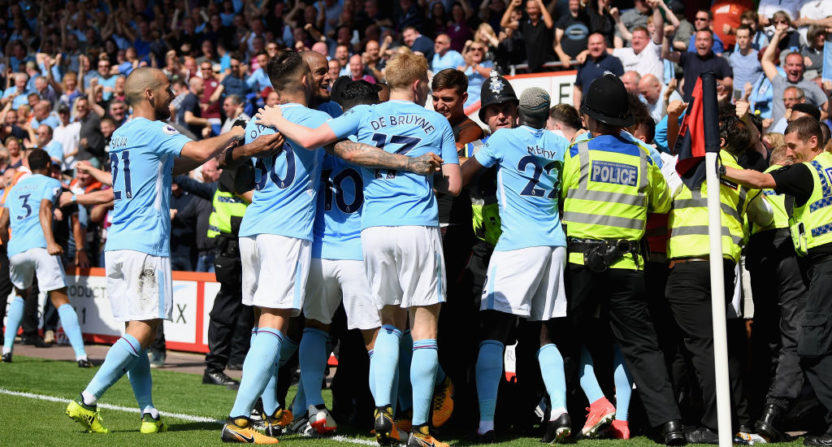 Let’s call a spade a spade here. Manchester City should win the Premier League again this season. Even if you hate picking the favorite, or hate picking a team to repeat (I do for both), it’s almost impossible to think that anyone can catch a relatively young team that won ONE HUNDRED freaking points last season. Even if City regress from last year, which is extremely likely, they still finished 19 points clear at the top of the table leaving them plenty of room to regress and still win the league.

If that’s not enough to convince you, ask yourself this. Who’s catching them? Manchester United finished second last year but did so mostly through smoke and mirrors. They have more than enough talent to mount a serious challenge but in two years under Jose Mourinho they’ve never been able to get the best out of that talent and all the numbers suggest this team will regress even more than City.

Liverpool and Chelsea are both intriguing options. In the second half of last season, Liverpool emerged as a very dangerous team, as evidenced by them knocking City out of the Champions League in the quarterfinal and reaching the final. Other than City, they seem to be the only top club who have spent money this season to improve themselves. However, in the Jurgen Klopp era, Liverpool has always been plagued by inconsistency. Right when they win a big one, they lose a game they should have won easily. They’re certainly the most likely to challenge City for the title this season but it’s tough to say they will be consistent enough to pass them.

I throw Chelsea in there simply because they were the last team to actually win the title and that talent is still there. Last year, they were undone by turmoil within the club and their manager. Now with a new manager, there’s a chance the club can stabilize and mount another challenge, but there’s also a chance that Thibault Courtois and Eden Hazard both leave and they’re even worse.

As for Tottenham, it’s hard to see them finally getting over the hump as they did not address the one problem they always have. A lack of depth. If Harry Kane gets hurt, or they get injuries on defense or central midfield, the team tends to struggle. That will make it hard to compete with a City team that has more depth than it knows what to do with.

So there you have it, Manchester City will win the 2018/19 Premier League title easily. Right?

Not so fast. We’ve said this about title winning Man City sides in the past and yet City have never won back-to-back Premier League titles, despite having better teams than everyone.

What’s stopped them in those years? For the most part they did it to themselves. They just didn’t care enough.

Manchester City is a team of mercenaries. That’s not meant to be an insult, it’s simply the way the team is built. None of City’s first team players came up through the club’s academy, therefore none of them have a boyhood attachment to the club. City doesn’t have an illustrious history and they play in a city with awful weather. There’s only one reason to sign for Manchester City, money. Lots and lots of money.

A lot of money can buy you a very good football team, but it can’t buy you the other intangibles that the other major European clubs had.

Manchester United’s dominant teams had a homegrown base and a manager that had a contagious hunger to win. Barcelona’s dominance earlier this decade was built on the backs of a core that came right from their academy. Real Madrid is a team with the most similar model to City, but their history has made them a team that players from all of Europe dream of playing for. Yes, Real pay more than other clubs, but they don’t necessarily have to overpay to get the player that they want.

For Manchester City, every player is there because City is paying them more than anyone else. That’s not to say the current players don’t want to win, but past versions of this team definitely showed those characteristics in the seasons after they won the title and their on field performance showed.

City have an ace in the hole this year in manager Pep Guardiola. He’s as experienced as they come in getting teams that won last year to repeat that performance. Despite setting records for goals and points in a season with a very young attack, they still added Riyad Mahrez to their squad, a move that will no doubt keep competition for places in the team very high.

Having said that, City’s owners have made it clear that they want the Champions League. It’s feasible to imagine that winning in Europe will become the priority for the Sky Blues this season and it’s possible that could cause them to slip up in the league.

Last year, City had a hungry team. Many players in the squad were winning their first Premier League medal. This year, they’ve all been there before and it’s hard to say how they will react to that.

Man City will once again be the favorites to win the Premier League this year. If they don’t, it won’t be because someone like Liverpool outplayed them, it’ll be because City opened the door for them by not playing as well as they could have.