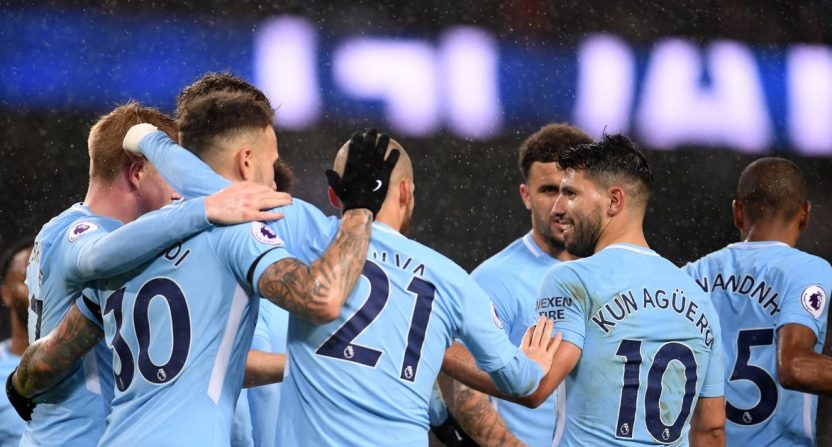 Because of the effects of Storm Clara, Manchester City and West Ham had to postpone their game this past weekend. It was definitely a tough decision but when it comes to the safety of the public, it’s better to be safe than sorry.

Not that this should have affected their decision but this postponement could be the catalyst on a scheduling problem for Manchester City. Man City already has a game against Arsenal that needs to be made up because they are in the EFL Cup final and now City has a second game they need to make up.

With players already on break, this upcoming weekend isn’t an option to make up the game and therein lies the problem. With fixture congestion as bad as it is, there aren’t too many open spots for Manchester City to reschedule any game, much less rescheduling two of them. If Manchester City gets eliminated before the Champions League semifinal, rescheduling is a lot easier but if we look at the worst case scenario, there may be problems.

When Manchester City comes back from their break, they have 12 weeks left before the Premier League season ends. Looking at what could take place, City only has three potential openings to reschedule games if they can make the semis of the FA Cup and Champions League.

With West Ham only having Premier League, they will be the easiest to reschedule. Newcastle is also in the FA Cup so if they make the semis and Man City doesn’t, their 4/18 Premier League game will also be postponed. Arsenal is still in the FA Cup and Europa League so if Man City is eliminated from the Champions League, they still may have trouble rescheduling their game.

More than likely, the Arsenal game will be moved to the week of 5/11 and put that right before the end of the season. It’s the toughest game to reschedule and that’s a week both teams know they won’t be playing. If it gets to this point, the Newcastle game is likely moving a few days later for the week of 4/20. That midweek is typically open for PL games delayed due to the FA Cup. And then for West Ham, arguably the easiest game to reschedule, would likely be on the week of 3/9.

Granted, if Man City is eliminated from either the FA Cup or the Champions League, it gets much easier to reschedule but the fact we’re in this position tells us how greedy modern football is. Everyone is so focused on stuffing games in every open spot and maximizing revenue that when things happen that requires rescheduling a game, chaos either ensues or that team loses a precious open midweek.

It’s getting to the point where teams are making decisions on what competitions to go after because it’s just too much. Jurgen Klopp has been very vocal on fixture congestion and his actions have backed up his words. When Liverpool had to go play in the FIFA Club World Cup, Klopp had no choice but to play the U23 team in the EFL Cup against Aston Villa the day before. And to not impede on their winter break, Klopp decided to play the U23s Liverpool’s FA Cup replay against Shrewsbury Town. Liverpool lost to Villa but beat Shrewsbury Town but results aside, it’s not a good look for the sport when teams feel they have to effectively ignore a competition in order to be fully ready for another.

Whether it’s Liverpool or Man City or anyone, it’s like teams are getting penalized for the more success they have. That statement will not garner much sympathy from the public and I agree that’s a very “first world problem” to have but every team no matter their division has some sort of fixture congestion. That might not be as big of a problem for most right now but it will be and if FIFA, UEFA, the FA, and the Premier League cannot stop stuffing games in every potential opening, there will be no chance to reschedule games due to emergency situations like bad weather and that’s going to make the sport worse for everyone other than the administrators who just collect money.