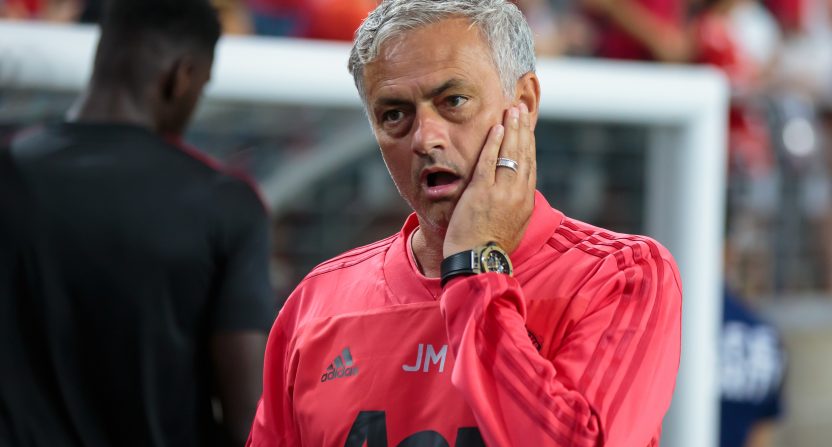 Mourinho’s jolt of minor of success at Old Trafford was short lived. After winning a League Cup and Europa League double in his first season, he spent the next year and a half falling out with his players, the board, and virtually anyone at the club who it was possible to fall out with.

It’s been obvious for weeks that he’s lost the dressing room, and a 3-1 loss to Liverpool was the nail in the coffin. Who would have thought that United fans would be so grateful to have lost to Liverpool?

Manchester United is a club that prides itself on youth development, promoting from within, and an exciting brand of football. Their marriage with Mourinho, a man who shuns youth in favor of established players, and favors a pragmatic defensive approach, was always going to be awkward at best. It seemed inevitable that it would eventually happen, but it was also inevitable that it wouldn’t last.

Now the question turns to, where does the club go from here?

Sky Sports has reported that the club plans on hiring an external caretaker manager until the end of the season. Names such as Laurent Blanc or even Gareth Southgate have been rumored to be in the running. Reports indicate that former Manchester United striker Ole Gunnar Solskjaer is the favorite to take over in a caretaker role. Tottenham manager Mauricio Pochettino is strongly considered to be United’s number one long-term target come summertime. For all the rumors about former Real Madrid manager Zinedine Zidane being ready to take over at Old Trafford, for the moment he doesn’t seem to be in the running.

As for the club, firing Mourinho is only step one. This club has a lot of problems and Jose Mourinho was simply just one of them. The club needs to modernize. A director of football needs to be brought in imminently so the football side of the club can be built up the way the commercial side has.

This is something that club Chairman Ed Woodward seems to understand. It was announced months ago that the club were looking to go in that direction, much to the ire of Mourinho.

The idea seemed to go away over the past few months, but reports this morning suggest it came up again on Monday, and Mourinho’s resistance to the idea may have been the final straw.

The club now must put Mourinho in the past and look to the future. This season may be a disaster but the campaign as a whole is not a lost cause.

The club still has two trophies to play for and that’s where their resources should be going. The FA Cup hasn’t begun yet and coming away from this disaster of a start with a trophy would be a massive statement.

The league is a different story. It can’t be won, that would require a historic collapse from two teams, and a big collapse from two others. There’s still a chance to finish top four but honestly the best thing the club could do right now is forget about this season.

Every move the club makes should be about the future. As they plan on hiring a caretaker manager, their instructions should be clear; you’re here to help us prepare for next year.

Don’t try to make a big splash in the transfer market, go after younger cheaper players with potential. Sign a young center back, a young fullback, and a young holding midfielder and give them the next six months to settle into the club.

Young players often take a while to settle in. Trent Alexander-Arnold wasn’t a fixture in Liverpool’s team until February last season. But once he was, he ended the season starting the Champions League Final and was on England’s plane to Russia. Give them 8-10 appearances regardless of how they perform to expose them to the Premier League, this way they’re more ready for next year.

Everything should be about finding out more about this team. Does Alexis Sanchez have a spot on this team? Maybe he scores 10 goals in the second half of the season, or maybe we see that he could never play with these guys at all. Can Scott McTominay be a lone holding midfielder or was he really just a pawn in Jose Mourinho’s war with Paul Pogba? Maybe Victor Lindelof and Eric Bailly will actually fulfill their potential when given actual coaching.

Is Romelu Lukaku that bad or just suffering from a lack of confidence? If it’s the latter, he would never have broken that in Mourinho’s system that provides him no support. Give the youngsters like Angel Gomes, Tahith Chong, and Mason Greenwood some chances. Are they really ready for the physicality of the Premier League?

Those are the questions that United should be looking to answer over the next six months. Don’t worry about the results, not only do United have too much talent to fall down the table but they’ll see an immediate bump now due to Mourinho leaving and from playing several teams who don’t have squads big enough to handle the festive fixtures. (Chelsea were on 15 points when Mourinho was sacked, they finished with 60, there will be a bump).

Rome wasn’t built in a day and United’s problems aren’t going to go away overnight. The first step in solving problems is to recognize that there is one. Firing Jose Mourinho isn’t going to magically whisk all of United’s other problems away.

But it is step one.