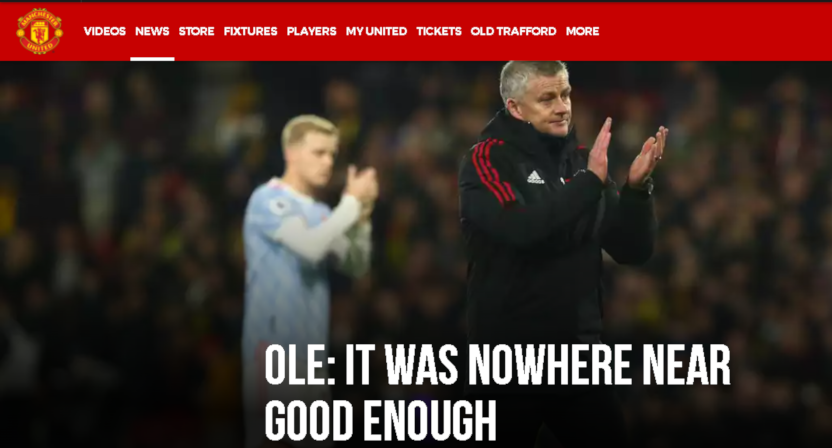 It’s been a rough Premiership season for Manchester United, currently seventh in the table with 19 points from a record of five wins, two draws, and five losses. Their 4-1 away loss to Watford (4-1-7 and 16th in the table even after that win) appears to have been the final bit of doom for manager and club legend Ole Gunnar Solskjaer, who first took over as caretaker manager when the club fired José Mourinho in December 2018, then took over on a three-year deal as permanent manager following a strong end to that season. They finished sixth in the league in his first full season, then third in his second and second in his third (which also came with a trip to the Europa League final), leading to him getting another three-year deal. But the slow start this year has amped up the criticism for him, and soccer insider Fabrizio Romano reported that he was out Saturday evening:

Once Joel Glazer approves the decision, it will be confirmed and announced by Man United. pic.twitter.com/e9V7GeLIE7

Here’s more on this from Duncan Castles of The Times of London:

Manchester United have decided to dismiss Ole Gunnar Solskjaer as manager after a humiliating 4-1 defeat away to Watford.

An emergency virtual board meeting was called by the Glazer family during the second half of the match and within the talks, which started at about 7pm tonight, the group managing director, Richard Arnold, was instructed to negotiate the precise terms of Solskajer’s departure with the Norwegian. It is believed that it would cost United about £7.5 million in severance pay to end his three-year tenure. Solskjaer signed a new contract in August but his deal is understood to include a one-season compensation payment should he be sacked. Darren Fletcher, the club’s technical director, is poised to take temporary charge.

If that’s accurate, we’ll see how Fletcher does as a replacement. And we’ll see what’s next for Solskjaer. He has other past managerial experience at Cardiff City and at Molde in Norway, and there were certainly some promising moments during his United tenure. But it likely didn’t end the way he had hoped for. In fact, as he said to the club’s website afterwards, the result was “nowhere near good enough”:

“We started too late. We started at half-time. The second half was very good. In the first half we never turned up. They outfought us, we allowed them to get the ball in the box, we allowed them space. They won most of the challenges. And then you get to 40 minutes 1-0 down and you’re probably lucky to be 1-0 down, David [De Gea] made two fantastic saves from penalties and there were some blocks. But then that second goal came in. From half-time, the response was very good. I thought we played really well for half an hour until we ran out of legs. But it was nowhere near good enough of course. I’m not going to say anything but that.”

[Fabrizio Romano on Twitter, The Times of London; image from ManUtd.com]