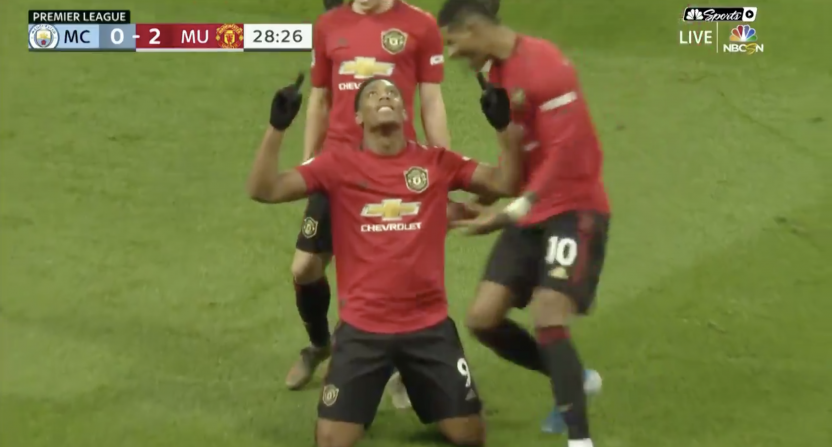 Manchester United hasn’t had the best season but in times where they needed to step up, they have done that. To date, they are the only team to get a result against Liverpool this season and just a few days ago, got a big win against Tottenham and former manager Jose Mourinho.

In the 179th Manchester Derby, the guys in red stepped up once again and defeated their rivals in blue 2-1 at the Etihad. It was a game that had some fine play, some questionable calls, and some terrible fan behavior that ultimately put a stain on the game.

The first half was about when and how VAR was used. At times, it seemed like Manchester United got away with a couple potential handballs that could have been penalties. One was reviewed close to halftime but wasn’t overturned. One call that was overturned by VAR was done on Manchester City. Anthony Martial was taken down by Bernardo Silva and while it wasn’t initially a penalty, VAR overturned that. Marcus Rashford capitalized and put United up 1-0.

Then just six minutes later, Anthony Martial threaded the needle on the near post and with no margin for error, doubled United’s lead after a half hour.

The game took an ugly turn in the 67th minute. As United was set to take a corner kick, some Manchester City fans threw things onto the field. A closeup of the trash thrown by the trash fans in the stands consisted of multiple lighters and a bottle. At some point, an unknown object was shown to hit Fred from behind as he was setting up for the corner. Fred stepped off to compose himself but as he walked back for the kick, someone in a red shirt and black vest made what appeared to be monkey gestures and noises at Fred and/or Rashford.

Almost immediately after the game, Manchester City released a statement regarding what happened and said they are working with Greater Manchester Police in identifying the people involved in throwing things and who were being racist. City also stated that those found guilty would be “banned from the club for life.” In their respective postgame interviews, Pep Guardiola and Ole Gunnar Solskjaer echoed similar sentiments to City’s statement.

City would get a goal back late and really put the pressure on United but an equalizer wasn’t in the cards. Manchester United would go on to win 2-1 and really put a wrench in the title race.

The loss means that Manchester City is 14 points behind Liverpool after 16 games. While this doesn’t completely destroy City’s title hopes and there’s still five months left in the season, including the festive season, City pretty much needs to go on a historic winning streak as well as a historic collapse by Liverpool to catch up to them now. City is 14 points behind and last season, Liverpool dropped a total of 17 points all year. If anyone is to unseat Liverpool, it’s probably going to be Leicester while City may be better off focusing on trying to win their first Champions League.

For Manchester United, this result has to keep Solskjaer on for the rest of the season. Yes, there were whispers and wishful thinking that he’d be sacked but if you get a result against Liverpool and defeat Mourinho’s Tottenham and Guardiola’s Man City in four days, you kinda deserve the rest of the season. The win moves United to fifth and are within five points of Chelsea for the top four. Suddenly, things aren’t looking so bad on the red side of Manchester.