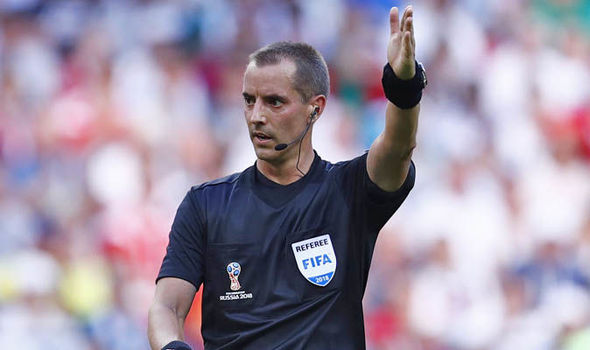 Could there be a “Geiger Show” in front of billions around the world? It very well could happen. FIFA revealed their list for referees for the remaining four World Cup matches and American referee Mark Geiger is on the list of 12 available for selection.

This means that Geiger could be selected for a semifinal, the third place game or the final itself. And if he is selected, it’ll be unchartered territory for any American referee.

It’s important to note that this isn’t a guarantee that Geiger would be selected. Among that list of 12, up to eight will be chosen as either the head referee or the fourth official (assistant referees are chosen from a different list) so Geiger has a two out of three chance to work a match.

So far, the only assignment that has been revealed has been for France vs. Belgium and Geiger was not selected for that. A Uruguayan-Mexican team is taking charge of the first semifinal. Referee assignments are usually revealed a day or two before the match so the referee crew for Croatia vs. England will likely be revealed sometime in the next 24 hours.

Geiger has had a rather…memorable World Cup. I’ll leave that up to you whether that’s good or bad thing. To recap, Geiger first worked Portugal vs. Morocco and was accused by Noureddine Amrabat of being biased after saying Geiger asked for Cristiano Ronaldo’s shirt (later changed to Pepe). FIFA found no evidence given FIFA has access to Geiger’s microphone and would be able to hear such a request and cleared Geiger.

After a rather impressive performance during South Korea’s defeat of Germany where Geiger correctly overturned a call on VAR that gave South Korea their first goal, he took charge of Colombia vs. England and that’s where things got out there.

Like any knockout game, the stakes are higher and Geiger wasn’t afraid to give out the yellow cards, giving Colombia six yellows to England’s two. To some, Geiger lost control of the game and was just dishing out yellows for no good reason. To others, he made the best of a situation where there was constant fouling and physicality (that’s putting it nicely) that if Geiger had started passing out yellows at the start, there may not have been too many people left on the pitch. If you search Geiger’s name on Twitter, you had fans for both teams say he was biased against them so if you can accomplish that, I guess they cancel each other out and you’re not really biased.

This isn’t to say that Geiger has never been in over his head on big matches. I mean, there was that debacle in Atlanta at the 2015 Gold Cup semifinal where Geiger admitted to making errors that “impacted the outcome” of the Mexico vs. Panama match. But it should also be noted that many people hate even the most renowned and best officials around the world and think they’re against their team. That’s the entire point about VAR. It’s not going to be utilized perfectly and there will be arguments on whether it should or shouldn’t have been used but it has corrected a bunch of bad calls before so if someone has hesitation about a “Geiger Show,” or let’s call it for what this actually is, an American, refereeing the World Cup Final, VAR is there.