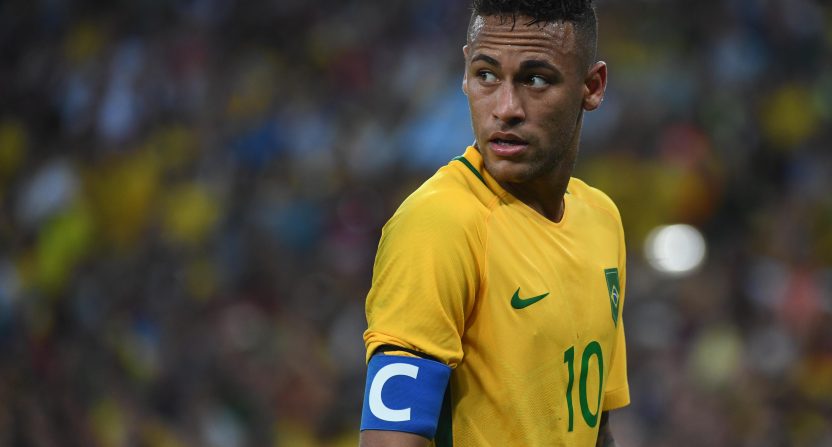 There’s going to be the hopes and dreams of millions on the shoulders of Lionel Messi and Neymar at this month’s World Cup in Russia. The two global superstars are going to be tasked with carrying Argentina and Brazil respectively to lifting the World Cup trophy once again. That pressure is immense enough on its own, but imagine if feeding hungry children was also on your shoulders in trying to win the world’s biggest sporting event.

Mastercard launched a campaign last week that pledged to donate 10,000 meals for every goal scored by either Messi or Neymar to “fight childhood hunger and malnutrition in Latin America and the Caribbean.”

Goals that changes lives: for each goal scored by Messi or Neymar Jr. Mastercard will donate the equivalent of 10,000 meals to @WFP to fight childhood hunger and malnutrition in Latin America and the Caribbean #TogetherWeAre10 #StartSomethingPriceless https://t.co/URfIp77ElN pic.twitter.com/Ckq61oJgld

While at first glance it seems like a noble gesture, when you think about it for more than five seconds it really is messed up. Mastercard clearly has the financial capability to feed thousands and make whatever donation they want, but will only do so if these two very specific players score a goal in a soccer match? If a goalie saves a shot from Messi or Neymar are they also robbing starving children of much needed food at the same time? How would you like to have that on your conscience?!?

The Mastercard campaign was panned as one of the worst promotional ideas conceived this millennium, receiving an incredible amount of negative feedback. Even Brazilian manager Tite criticized the idea and said he would rather Mastercard make a donation if any Brazilian or Argentinian player scored during the tournament.

So, MasterCard clearly have the money. But the hungry, malnourished children only get the food if Messi & Neymar have a good World Cup?!?!?

Just for context, one month ago, MasterCard reported a 38% increase in revenue…to $3.5bn. https://t.co/tBE9jWfYXG

Easily the worst marketing I’ve ever seen😱. This seriously got through the different levels of management, and you all said go ahead 😢 https://t.co/uPbGU9VH0H

Thankfully, Mastercard finally came to their senses and ended the ill-fated idea. Instead of centering a feeding campaign around Messi and Neymar, the credit card giant will instead go ahead and donate 1,000,000 meals this year instead.

The campaign was criticized online as a stunt ahead of the World Cup, where rival credit card giant Visa is the official FIFA sponsor.

Even Brazil coach Tite, whose team is sponsored by Mastercard, expressed frustration with the campaign that only rewarded the United Nations World Food Programme if Neymar scored.

Having spent the weekend defending its “goals change lives” advertising on social media , Mastercard said on Monday it “heard the comments about our campaign in Latin America” and was withdrawing it.

“We don’t want fans, players or anyone to lose focus on the critical issue of hunger and our efforts to raise support for this cause,” Mastercard told The Associated Press. “Based on the feedback, we are adjusting this campaign to replace the 10,000 meals donation per goal by Messi and Neymar Jr. with a contribution of one million meals in 2018. This is in addition to 400K meals we have already donated as part of the campaign.

This was the only right and humane decision to make. Even though the World Cup matters to a lot of people all over the world, it shouldn’t have a direct impact on whether or not children have to go to bed hungry or not.