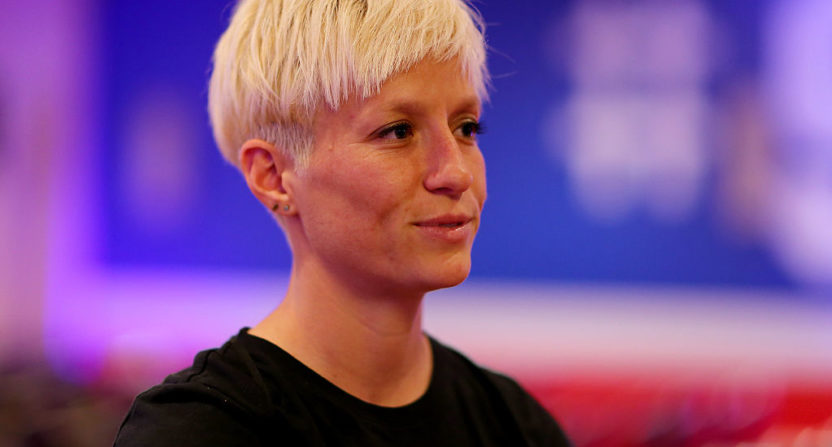 FIFA’s latest debacle on women’s soccer has attracted criticism that they are absolutely clueless about the game. Megan Rapinoe was one of the most notable players who has ripped FIFA and revealed what many know, FIFA just doesn’t give a crap about women’s soccer.

When it came to awarding the Best Women’s Player, one of their selections seemingly didn’t belong.

Lieke Martens from the Netherlands won, which is much deserved. Martens scored three goals at the Women’s Euro tournament, won the Golden Ball and Netherlands won the tournament. That’s a pretty impressive resume for the year so Martens was a worthy winner.

Carli Lloyd was nominated and while she is one of the best in the world, she was injured for a bunch of the year. Lloyd hasn’t scored for the USWNT since September 2016, only had two goals with the Houston Dash this NWSL season and while on loan at Manchester City, scored three goals. Lloyd won an FA Cup but she’s had better years and I would have chosen someone else but at least you could argue Lloyd belonging on the shortlist.

But that pales in comparison to Venezuelan Deyna Castellanos, who was the third nominee with Martens and Lloyd. And Rapinoe pointed out that she never even heard of Castellanos.

“The award just doesn’t hold a lot of weight when you’ve got someone on the list I’ve never heard of.”

Some might take that as hyperbole but there’s a chance Rapinoe hasn’t heard of Castellanos. Castellanos is a very talented player but the 18-year-old striker plays for the Florida State Seminoles and Santa Clarita Blue Heat. And Castellanos has just four caps with the senior Venezuelan National Team with zero goals. This is where Rapinoe’s ire comes from. If this was an award for the player with the most potential, Castellanos would probably win. But this is for the best women’s soccer player of the year and I’m sorry, Castellanos isn’t one of the three best players in the world.

That would be like making Christian Pulisic a finalist for the Ballon d’Or with Ronaldo and Messi. I love Pulisic like any other US Soccer fan, but he’s not the third best player in the world. And even that is a more likely scenario because Pulisic at least plays for Borussia Dortmund. Hopefully that’s the case someday but not in 2017.

Castellanos’ goal was very deserving of being a Puskas Award finalist. And that may have been why she was on the shortlist for Best Women’s Player.

When all votes were counted, Martens received 21.72% of the vote, Lloyd got 16.28% and Castellanos got 11.69%. Dzsenifer Marozsan from Germany, who had the equalizing assist and a converted penalty in a Champions League win this year, had 11.47%.

Only taking away the 25% fan vote and just including the vote for national team managers, captains and media, Castellanos only had 4.71% of the vote, 9th highest. Castellanos was the only person to move up any positions once the fan vote was tallied and needed 33% of the fan vote to move up that high. That leads me to believe that most of the fans voting had no clue about who’s great in women’s soccer, just saw that goal and thought “well if she scored that, she’s gotta be one of the best in the world” and just voted for her on that criteria alone.

This isn’t on those fans who watch women’s soccer week in and week out who have an understanding of the women’s game and are aware of what’s going on. This is on the general soccer public at large for having a lack of intelligence about women’s soccer and FIFA giving an equal weight to fans who most seem to only watch the men play, causing situations like this. Coaches, players and the media seem to be aware of what’s going on and fans ruined it by going off of the one women’s player who was nominated with the men and had a great looking goal.

What’s most disappointing is that Castellanos has to deal with getting dragged in the mud for something that wasn’t her fault. She probably wasn’t expecting to get nominated and didn’t ask for any of this. And if FIFA nominated me for an award even though others should have been nominated before me, I’m not telling FIFA to nominate someone else. Of course I would take it and embrace the honor. This isn’t Castellanos’ fault, it’s FIFA’s fault. Change the voting process and give less voting power to the fans. That might make fans upset with me but the collective whole clearly cannot be trusted so maybe give the three other groups 30% weight and the fans 10% in future years. That might make FIFA’s awards show a bit more legitimate.

Oh and FIFA, have a women’s Best XI for next year. Having one for the men and not for the women doesn’t help you trying to convince people that you care about women’s soccer so let’s fix that for next year.