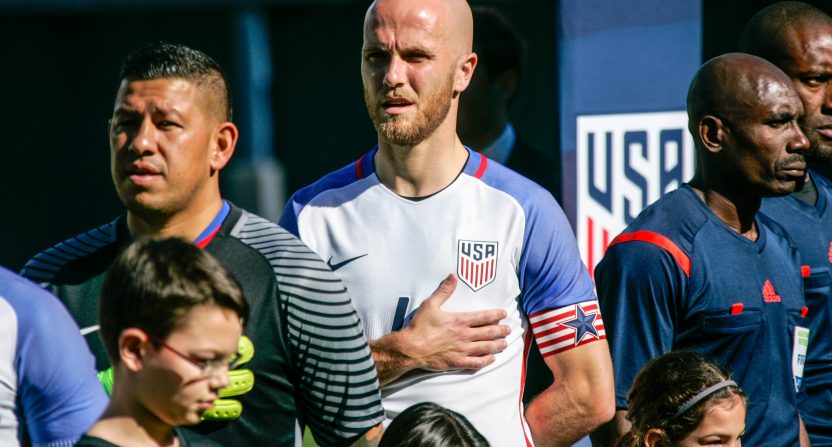 The USMNT takes on Honduras tonight in what amounts to a must-win World Cup qualifying match, and if they’re going to get out of the Hexagonal basement, they’ll likely need a strong game from captain Michael Bradley.

Bradley has filled that role since the 2015 Gold Cup, and he’s seemingly growing more comfortable with the off-field duties involved in the role.

And so I feel strongly that everyone should stand. If you have that big of a problem with something that’s going on in our country or feel so strongly that you need to protest in that way, then I would say don’t come. Don’t play at all.”

Bradley’s position might seem at odds with what we’ve come to learn about him personally, considering they’re prefaced in the piece by comments praising coaches like Gregg Popovich. Bradley has also stood up for the gay community in the wake of the Pulse nightclub shooting, and more.

But Bradley’s position on the subject is actually quite nuanced, because while he thinks players should stand, he doesn’t think it should be forced:

“Having said all of that, I do not like the idea that it’s now mandatory to stand. People have the right to peacefully protest and express what they think.

That’s pretty much the textbook way to defend free speech of people with whom you disagree. The entire piece is very much worth it, as Bradley comes across as one of the more thoughtful, eloquent athletes around.

Hopefully he can summon the right words too rally the USMNT tonight, because they really need it.