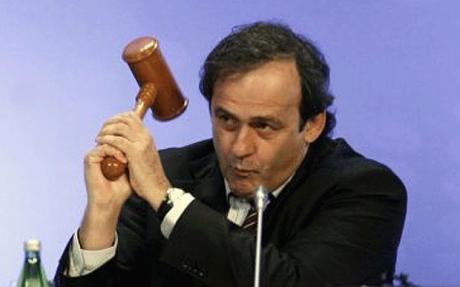 It’s been a bit of a running joke that because France typically gets one of the more easier groups in every World Cup that something has been going on to get them a fortunate draw each time. Well in 1998, a bit of trickery actually took place to help France avoid meeting Brazil as long as possible.

Michel Platini, who is currently banned by FIFA for various acts of corruption, was on the organizing committee when France was named World Cup hosts for 1998. Platini revealed on a French radio station that they “did a little trickery” when organizing the schedule.

“When we organised the schedule, we did a little trickery,” he told radio station France Bleu Sport.

“France-Brazil in the final, it was the dream of everyone.

He laughed as he went on: “We did not spend six years organising the World Cup to not do some little shenanigans. Do you think other World Cup hosts did not?”

Platini tries to play this down by calling it “trickery,” I call it fixing.

For scheduling reasons, the hosts are typically locked into a specific position but the other 31 spots are up in a random draw. Two days before the draw took place, FIFA revealed the draw process and announced that Brazil would be put in Group A and France in Group C while the other 30 teams would be in the draw.

So in that instance, France didn’t get to choose who they had in their group which ultimately became South Africa (24 FIFA ranking), Denmark (27) and Saudi Arabia (34). That designation is important because if Brazil and France both won their group (which was expected), it meant that the two teams wouldn’t meet until the World Cup Final.

So it’s not that France fixed the entire tournament, but they did do their best to avoid the defending World Cup champs and top ranked team in the world. That scenario played out as France and Brazil met in the Final which saw France win 3-0 for their first World Cup.

This year, France has a rather tough group with Peru, Denmark and Australia. FYI: if France wants to avoid Brazil this year, it might benefit them to finish second in their group because winning the group may put them together in the Semifinal.