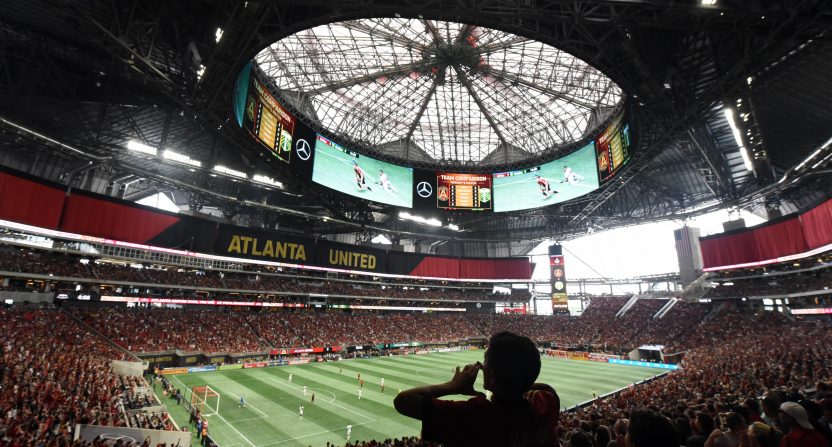 This year’s MLS All-Star Game will be at Mercedes-Benz Stadium in Atlanta and Atlanta United FC fans are making sure their players will be represented when they play against Juventus on August 1.

The fans chose the Fan XI, which isn’t necessarily the Starting XI that Tata Martino would pick, but is the XI that was voted by the fans. In total, six Atlanta United players were chosen including goalkeeper Brad Guzan, defender Michael Parkhurst, midfielders Miguel Almiron, Ezequiel Barco and Darlington Nagbe and forward Josef Martinez.

The rest of the team consists of defenders Laurent Ciman of LAFC and Graham Zusi of Sporting KC, Portland Timbers midfielder Diego Valeri and forwards Zlatan Ibrahimovic of the LA Galaxy and Carlos Vela of LAFC. Vela got in on EA Sports’ “More than a vote” contest where more people scored goals with Vela on FIFA 18 than any other MLS forward.

I usually have issues with who the fans vote every year because it winds up just being a popularity contest instead of who actually has had a good season in MLS. While I feel the same way this year, this is a better team than in years past. The past couple years were filled with older European players with name recognition. That’s why the past couple years had players like Andrea Pirlo and Steven Gerrard playing. Two players who, while they were once legends, were rather terrible by the time they entered MLS.

This year, there really isn’t anyone who fits that description. Even Zlatan has had a decent outing even though one could make the argument that he hasn’t played enough to figure out if he’s had an all-star worthy season.

In terms of the Atlanta players, it’s a fan vote and the game is in Atlanta so Atlanta fans are going to stuff the ballot box. They have the best record in MLS right now so it’s not like this isn’t deserved. I would however balk at calling Guzan and Nagbe all-stars by any stretch of the imagination. I’m also on the fence with Barco but Almiron, Martinez and Parkhurst deserve to be in.

Again, this isn’t exactly going to be the actual Starting XI, the rest of the players will be chosen at a later date but as of now, there’s going to be a lot of hometown representation.