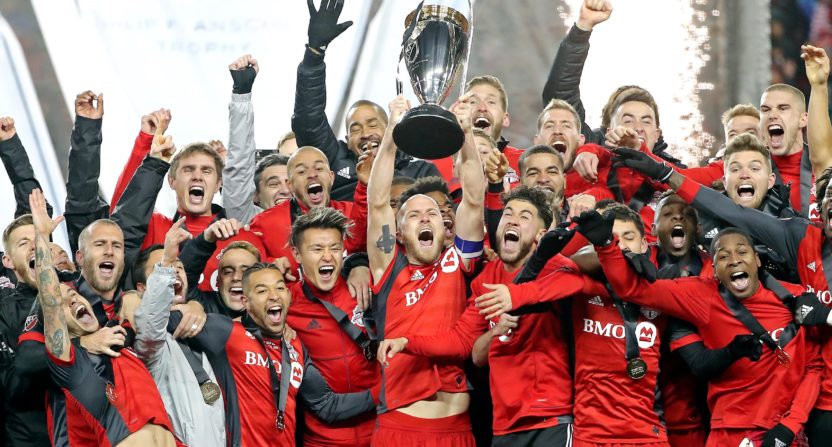 Going into the 2017 MLS Cup Final, there were two league-wide storylines that could have emerged.

A second-consecutive Seattle Sounders victory in Toronto would have (arguably) confirmed a 2014-2017 dynasty, one of few in league history. The Sounders would have a Supporters’ Shield and US Open Cup in 2014 and back to back Cups in 2016 and ‘17 with rosters centered around stars like Clint Dempsey, Ozzie Alonso, Nicolas Lodeiro and Obafemi Martins.

Toronto FC had a chance to secure the best ever MLS season and become the unquestionable greatest team ever. They won the Canadian Championship and the Supporters’ Shield with 69 regular season points from 34 games, the highest total in league history. No team had won their domestic treble before.

The latter narrative has been realized. Toronto emphatically exacted their revenge on Saturday, almost a year to the day after they fell on penalties in front of their home fans. The Reds dominated and won 2-0 on a 67th-minute Jozy Altidore winner, performing better than they have in weeks as they triumphantly lifted the Phillip F. Anschutz trophy at home.

MLS, parity-driven for 22 years, has never seen a team rise to this level in its history. TFC did everything right, spending lavishly and smartly on three Designated Players, utilizing Targeted Allocation Money to its greatest extent, taking full advantage of unique MLS roster mechanisms and building a productive academy that ranks among North America’s best.

Contenders from throughout this league’s history can stake legitimate cases as the best ever. The 2011 and 2014 LA Galaxy, driven by Landon Donovan, Robbie Keane and David Beckham, are both in the discussion. The 2001 Miami Fusion are an oldie but a goodie. Three teams from 1998 — D.C. United, Bob Bradley’s Chicago Fire, and the Galaxy — made a top 10 list I wrote not long ago.

TFC were top then, in November. There was debate on the subject at the time. There really can’t be now, when you combine the trophies, regular season records and the significant difference in league difficulty between this season and as recently as 2014.

No team in league history can match the talent on this club, and it’s not necessary to have watched any MLS prior to 2017 to recognize that. Center back Drew Moor knows it.

Drew Moor to his TFC teammates: “This conversation about whether we’re the best team ever? IT’S F***ING OVER!!!”

Frankly, they built their team in a superior way to the rest of the league. Having a cornerstone defensive midfielder like Michael Bradley was so, so important to their success. Defensive mid might be the most important position on the field, and you don’t win a championship without a top-tier one — just ask Seattle, who were without Alonso in the final.

Sebastian Giovinco and Altidore, who pair up top, join Bradley as high-paid DPs. Those two are supremely talented: they have combined for 88 goals and 48 assists since 2015, a pretty ridiculous total. Add Victor Vazquez, a No. 10 who fits the system perfectly and has been a teammate of Lionel Messi at Barcelona, and you’ve got an attack that scored 74 goals in the regular season.

They acquired starting center back Eriq Zavaleta and midfielder Marky Delgado in the Chivas RIP dispersal draft. They signed Moor, the cornerstone veteran defender, as a free agent. They traded for starting full backs Steven Beitashour and best XI nominee Justin Morrow from the Earthquakes, two years apart. Nick Hagglund, who was subbed on late in the game to secure the win, was a first round draft pick in 2014 out of Xavier, and starting goalkeeper Alex Bono went to Syracuse.

Establishing this level of top-level talent and depth farther down the roster is unprecedented in this league.

Manager Greg Vanney is setting his own additional precedents. He has maximized that depth by developing tactical flexibility and preparing his team to beat individual opponents. They looked very prepared in leg one of the conference finals in Columbus when they played to a 0-0 draw in a 5-4-1 with Altidore and Giovinco suspended, and they killed Seattle with an unexpected 4-4-2 diamond formation. They had used a 3-5-2 for the majority of the regular season.

The recent news that MLS would dramatically increase the amount of allocation money given to every team is an opportunity for more players like Vazquez to enter the league, and for clubs to start emulating TFC. As we see some teams do what Toronto have done while others lag behind, we will continue to see parity decline.

The gap between the haves and have nots, widened by increased TAM and GAM, will only exasperate the weakening of league-wide equality.

TFC’s influence is clear. Same goes for their greatness, confirmed by a tremendous 90 minutes against the Rave Green.