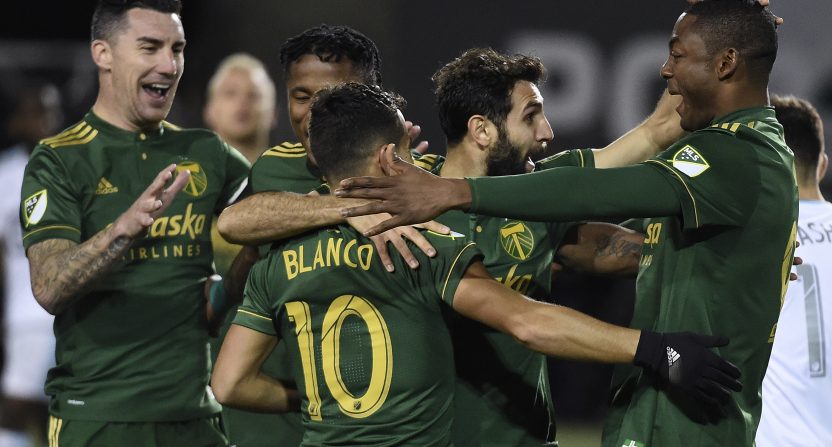 Some teams went out in MLS week one and seemed to have everything together, like they had been playing together for years and preseason actually did its job. Some looked like they had no interest in already starting the season, and were expecting a three week Florida vacation like they’re in Major League Baseball.

No team ever goes out in week one and looks like they will for the rest of the season, unless you’re FC Dallas, in which case scrappy 2-1 road wins against good conference opponents are going to happen more than a few times.

It’s important to be able to discern what exactly are long-term problems and what are just March problems, just like it’s important to know whether one good performance is evident of future success or not. A lot will change from this point forward, and whether you won 5-1 or you lost 5-1, nothing that happened this week will make or break you. Nothing will make or break you for a while.

Not that they were exhibitions or anything. Those fantasy points are real. There are things to take away from this week’s games, which is why we’re looking at every team that either won or lost and looking at their current situation, to try and see what their result can tell us:

Portland Timbers:
Portland was the only team to score more than two goals this weekend. Yes, Minnesota played their first game as an MLS team and they didn’t play a good lineup, but winning by four goals is always good, even if three of the goals came after the 80th-minute.

More-than-just-a-stat-filler Diego Valeri scored twice and had an assist while the perennially underrated Fanendo Adi had a brace of his own. Valeri and Adi have been tearing it up together since 2014, and these occasional scoring outbursts have become commonplace. But not so commonplace is seeing a player like Sebastian Blanco wreaking havoc right there with them. That’s scary.

Darlington Nagbe had a garbage time assist, but he did very little to threaten vulnerable right back Jermaine Taylor. Vytautas Andriuskevicius spent the night perched near the touchline, sending in threatening low crosses as often as Minnesota would let him, which was often. If Nagbe had been less tentative, it could have been worse for MNUFC.

The man of the match for many was debuting defensive midfielder David Guzman, who was calm, meticulous and safe with his positioning and distribution. Diego Chara, now free to roam as a 6/8 hybrid, will finish with at least 15 yellow cards this season.

As long as Lawrence Olum isn’t the long term starter at center back (he will be until May, at least) the Timbers will pretty solid. 5-1 wasn’t that much of an anomaly.

FC Dallas:
The best teams win the games they can win. FC Dallas probably would have been perfectly pleased with a 1-1 draw on the road at StubHub Center against a pretty good LA Galaxy team — they were actually going for it, subbing off a forward and a winger for a d-mid and a right back in the second half — but Kellyn Acosta scrapped out a really pretty goal (FCD are good at that) and they hung on for an impressive 2-1 result.

Houston Dynamo:
Romell Quioto and Erick Torres were buzzing, and the Dynamo won 2-1 against the Seattle Sounders. The front three pressed high and early, resulting in a number of early chances and Seattle couldn’t figure out what was going on. They did a little in the second half, as Clint Dempsey pulled one back, but Houston won anyway.

This is a really impressive result for last year’s Western Conference bottom-feeders. Let’s remember though, that they know a little something about unsustainable high-scoring early season results.

I will say that the front three of Quioto, Cubo, and Elis looks absolutely deadly. It would be better if they finished more and maybe tracked back sometimes, but for the most part, they were a big jumble of fun. The rest of the squad may be slightly less fun.

San Jose Earthquakes:
In the late Saturday game, the Quakes put together a 1-0 win over jet-lagged Montreal. The match included all the trademarks of a late-night San Jose game: a surprisingly good goal, a surprisingly little amount of chances and a red card. It also included something that is almost never seen in Quakes games: good performances from young players.

Tommy Thompson was really good and easily could have had a goal and an assist, at least. Dom Kinnear finally gave him an opportunity and he took advantage of it.

Minnesota United:
There’s a large portion of fans who do not like what they see in Minnesota, and I’m inclined to agree with them. The backline is a serious problem, particularly at right back. And center back Vadim Demidov, who was the worst player on the field on Friday, will prove to be a liability — and there is no semblance of chance creation or a connection between the midfield and the attack. They’ll scrape out goals with Christian Ramirez or Kevin Molino at times, but for the most part, I don’t see many strengths.

Their beatdown at the hands of Portland is evidence of a larger problem, even if they may have a better XI. I don’t think we’ll see much from them this season. They are going to be like a stereotypical expansion team entering their first season.

LA Galaxy:
The Galaxy lost to a well-oiled machine on Sunday, and a machine that could very well win more than one trophy. But when you’re at home and you want to be one of the better teams in your conference, you have to get at least get a result from those home conference games. It’s the beginning of the season and we shouldn’t try to take more from these games than we should, but you have to learn to get results.

Right now, the Galaxy wouldn’t be a playoff team, but by the time Gyasi Zardes comes back and some of the younger Homegrowns settle in, they’ll get there. Romain Alessandrini is, by all appearances, legit, and Gio dos Santos remains Gio dos Santos. The question is whether Jack McBean, Ariel Lassiter and Jose Villareal are good enough to log significant minutes (the way to find out, by the way is to give them significant minutes).

I am also concerned about the makeup of their backline. Jelle Van Damme can make up for a lot of problems, but when you have to start Rafael Garcia and Dave Romney at full back, you’ve got a bit of a problem. They’ll need Zardes to be that center forward, and they’ll need Robbie Rogers and Ashley Cole back as soon as possible.

New England Revolution:
This is one of the most intriguing teams in the league right now. The Revs are in the early stages of implementing a new 4-4-2 diamond formation, and despite an impressive stockpile of attacking talent that should on paper mix well, they underwhelmed in Colorado this weekend, losing 1-0.

To be clear, there is no shame in losing 1-0 in Colorado — it’s the most acceptable loss in MLS — but I’m sure Jay Heaps would sleep better at night if his team looked a little bit more, say, lively around the goal, and if he had an easier answer to the tactical questions facing him.

The main issue has not changed in the last year: New England have one too many talented attackers for the diamond in Kei Kamara, Juan Agudelo and Lee Nguyen. And it’s hard to put them all on the field at the same time and get the best out of them. Kamara is a tall, pure No. 9 who likes to hold-up play on the counter and hunt down crosses in the box, playing mostly in transition; while Nguyen likes to set up a camp around the box and play intricate passes until he finds a sliver of space to take advantage of. They don’t mix.

Heaps went with Kamara and Nguyen up top with Agudelo directly behind them, but that didn’t work for two reasons: 1) the relationship between Kamara and Nguyen remains tactically imperfect and 2) Agudelo was pulled away from the goal and forced to make late runs and track back rather than leading the line. Eventually, Agudelo and Nguyen swapped, but that meant the No. 10 Nguyen was isolated as the strikers clogged each other’s space.

This is a rather complicated and hard-to-solve dilemma that I do not have an obvious solution to (trade Kamara to San Jose is my best option). The Revs could still make the playoffs if only because their attacking big three is so talented that they’ll have scoring outbursts often, but if the defense and midfield doesn’t hold, they will go away fast.

Atlanta United:
The crowd at Bobby Dodd Stadium was fantastic except for the homophobic chants and the bottle-tossing. For the most part, it showed that Atlanta is great and they’ve got some great fans in large quantities. They also have some great players, but they’re an expansion team, and a lot of things won’t go their way at first.

And that’s why they blew a lead and lost 2-1 to the Red Bulls on Sunday. Jesse Marsch out-coached them and RBNY were better late. Tata Martino is a talented coach, but he should realize that Miguel Almiron might be better suited on the wing, and they could really use a center forward presence like Kenwyne Jones up top. They have too many really good players to fall into expansion oblivion.