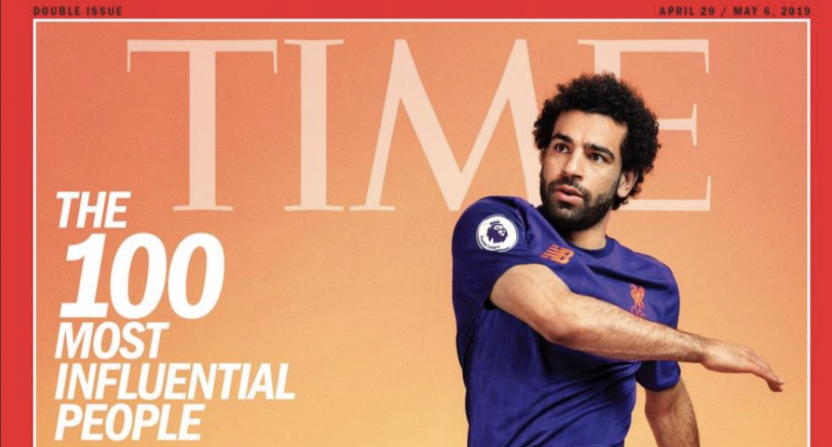 Time Magazine released its annual 100 Most Influential People issue and for the first time, a soccer player is one of the covers. That cover player is Liverpool and Egyptian National Team forward Mohamed Salah.

Salah is on one of six individual covers in 2019, along with Gayle King, Dwayne “The Rock” Johnson, Nancy Pelosi, Sandra Oh, and Taylor Swift.

Salah’s entry is written by Last Week Tonight host and Liverpool fan John Oliver, and his inclusion is warranted not only because he is one of the best soccer players in the world, but because he’s a Muslim who doesn’t minimize his faith. In a world where only the terrible actions of Muslim extremists are publicized, Salah transcends that through his play to be one of the top players without sacrificing his religious beliefs.

As a result, Salah is using his influence as a world famous soccer player to hopefully bring change to the Middle East. In an interview with Time, Salah called on the region to change how they treat women and grant them the same rights that men are granted. It’s unlikely that the words of one man will bring change to the region, but it’s worth a shot.

Salah is not the only soccer player on the Most Influential list. USWNT and Orlando Pride striker Alex Morgan was also included in advance of this summer’s Women’s World Cup and with her campaigning to have the US Women be paid the same as the US Men at the front of many people’s minds.

Three other athletes, in addition to Salah and Morgan, were included on Time’s list. Warren Buffet wrote about LeBron James’ achievements off the basketball court, including the many shows he’s producing as well as his “I Promise” school in his hometown of Akron, which has seen “extraordinary results” for the disadvantaged kids who go there.

Two-time gold medalist Edwin Moses wrote about track star Caster Semenya as she fights the perception many have about the differences between men and women. Semenya is a woman, but her natural testosterone levels are higher than the average woman, leading some to question her gender and opine that she has a major advantage over other women.

Justin Timberlake wrote about Tiger Woods. This had to have been planned before Tiger’s win at The Masters this Sunday, but his inclusion was perfect timing for a story about the best golfer in the world falling from grace, turning his life around, and proving a lot of doubters wrong to get back to the top of the golf world.