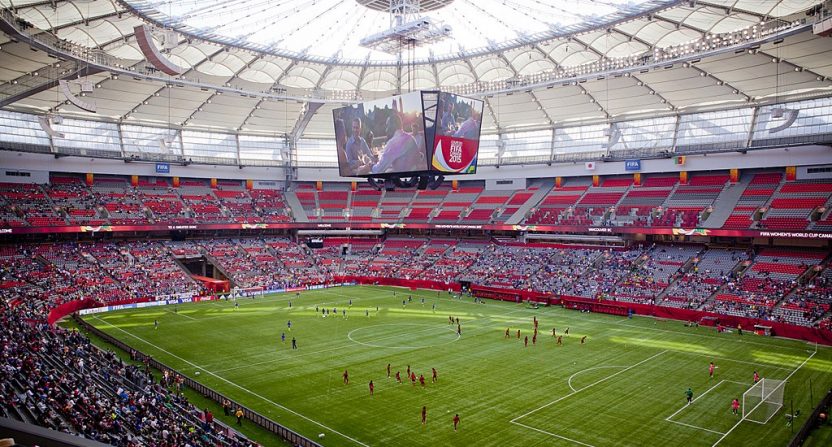 The Canadian portion of the 2026 FIFA World Cup (which will be hosted across the U.S., Mexico, and Canada) appears headed for some change. After initial discussion of numerous potential Canadian cities for the expected 10 matches hosted in Canada (this tournament will be the first World Cup with 48 teams, so there are lots of matches available), Toronto, Edmonton, and Montreal were the three still in contention ahead of the final decisions on host cities. But Montreal suddenly withdrew last week, and as per comments from British Columbia premier John Horgan Tuesday, that might cause Vancouver (which initially considered a bid before withdrawing in March 2018 over FIFA demands) to get back in the running. Here’s more on that from Richard Zussman of Global News:

“With Montreal stepping away, it creates a real opportunity for Vancouver being a host city,” Horgan told reporters at an unrelated news conference on Tuesday.

“I have had some preliminary discussions with the FIFA representatives here in Canada and we made it abundantly clear that if the proposal is as rich as it was back in 2018, we wouldn’t be interested. But I think that we are prepared to entertain those discussions and see where we go.”

…“You will remember when the initial proposal was put before our government we were just barely elected at that point. We were looking at the fiscal situation. We were making determinations about how best to go forward in a minority situation. It just didn’t seem to us at that time, there was other interest in Canada — Toronto, Montreal, Edmonton and others — and so when we looked at the FIFA presentation it was a little rich for our blood and we chose to give it a pass,” Horgan said.

“But now, fast forward to 2021, we are in a completely different situation. We are coming out of a global pandemic. Our tourism sector has been buffeted, perhaps more than any other sector over the past 16 months, and the prospect of inviting the world to Vancouver in 2026 all of a sudden takes on a whole new meaning.”

Horgan makes some fair points there in defense (or defence, for the Canadians in the audience) of this about-face. It absolutely may seem more worthwhile for Vancouver and B.C. to spend money on tourism promotion in the wake of the COVID-19 pandemic and what that’s meant for the city and the province, especially around tightened international travel restrictions over the past two years. Vancouver has often been a destination for American tourists, but border restrictions have stopped much of that travel. So there’s quite likely more local support and appetite for spending on something that could theoretically increase the city’s tourism appeal again.

One particularly notable aspect of the declining tourist trade in Vancouver is around foreign-flagged cruise ships, which used to have to stop in Canada en route to Alaska as part of the 1886 Passenger Vessel Services Act. After the Canadian federal government announced in February they’d extend a cruise ship ban until 2022 due to the ongoing pandemic, the U.S. government stepped in with a temporary suspension of that PVSA provision, allowing foreign-flagged ships to go straight from Lower 48 U.S. ports to Alaska. And some people and interests are now lobbying to make that move permanent. Vancouver’s one of the B.C. cities (along with Victoria) most affected by U.S. cruise ship stops, and a permanent change to the PVSA would definitely be a large blow for that city’s tourism industry. So there’s certainly some desire to spend on tourism now, and the 2026 World Cup might be a good fit there.

To be sure, the connections between governmental spend on sports and tourism dollars recouped by the wider economy (both immediately and over a longer period) are often overstated, especially by people who are trying to promote public funding for stadiums. However, Vancouver in particular has appeared to reap a couple of actual benefits from hosting the 2010 Winter Olympics (along with co-host Whistler, which hosted many of the alpine events) and key events (including the final) of the 2015 FIFA Women’s World Cup.

That latter tournament was also notable for U.S. broadcaster Fox constructing its studio set in a prominent Vancouver location above the seaplane dock at Canada Place, which meant that all the studio clips and screengrabs (see some here) showed off the city quite well. The amount of tangible impact there on future tourism is certainly up for debate, but it’s notable that Vancouver’s last two experiences with hosting big international sports events seem to have gone better than what we’ve seen with many other cities, and that may be another factor in the renewed governmental interest here. Montreal’s withdrawal also likely gives them some more leverage versus that 2018 presentation; it does seem quite probable that FIFA and Canada Soccer will want more than two Canadian cities hosting, and with Montreal out, there’s now suddenly more of an opening for Vancouver.

At any rate, it’s certainly interesting to see B.C. and Vancouver at least showing a willingness to jump back in the host city bidding here. Whether that will lead to anything can be questioned; talk itself is cheap, and it’s notable that even Horgan’s talk here so far has been “We won’t do it under the old terms, but if they’ll offer better terms, we might be interested.” So it’s quite possible this all falls apart, especially given that there would likely be discussions about replacing B.C. Place’s turf with grass for this event (not an easy or cheap proposition). But for the moment, the Vancouver 2026 conversations have at least been revived, and it will be interesting to see where that goes from here. Decisions on what cities will actually host are expected to be made by the end of 2021.

[Global News; top photo of B.C. Place during the 2015 Women’s World Cup from GoToVan on Flickr, via Wikipedia]