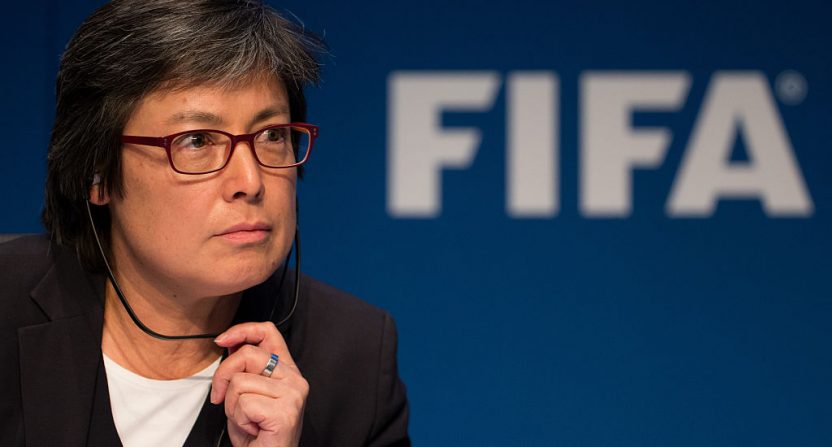 To help distance themselves from the corruption scandal that brought indictments to so many of them, FIFA ditched the Executive Committee in favor of a FIFA Council that would have more members.

A total of 36 FIFA Council members as well as FIFA President Gianni Infantino make up the Council. And in order to get more women involved, at least one spot per confederation must go to a woman. So that would mean at least six spots total would go to women.

This is great as long as its done right and women qualified to be in the position are going for that spot. This could easily be abused and a token female could be instilled just simply to vote for what benefits the confederation. The Asian confederation female vote would be a litmus test on if FIFA has truly evolved and they unfortunately failed.

Before women received guaranteed spots, Australia’s Moya Dodd got in by being better than the men. Dodd had been a member of Australia’s FA, became a VP in the Asian confederation and then became the only female member of FIFA’s Executive Committee in 2013. In an industry unfairly dominated by men, Dodd showed that if given the chance, women could make a difference.

The vastly experienced Dodd lost out in the FIFA Council election to Bangladesh’s Mahfuza Akhter 27-17 to become Asia’s female representative in the FIFA Council. Nothing against Akhter but Dodd was the vastly experienced candidate, laid out a platform and manifesto (Akhter didn’t) and when asked who won the Women’s World Cup, Akhter didn’t know the United States won.

North Korea didn't even finish in the top 4 at the last Asian Cup. Not a great representative of women in football. 2/2

What are we supposed to determine when this happens? Akhter is clearly unqualified when compared to Dodd. Dodd is the only female to have done the job and is easily the most experienced female in the world to be on the FIFA Council, much less Asia. So what’s behind FIFA’s logic?

There seem to be three scenarios that would be taking place here. The Asian Football Confederation and FIFA is either being sexist and are providing these female FIFA Council spots as a “token” spot and these women will not be treated seriously. They’re being corrupt and something went on behind the scenes to get Akhter elected and Dodd (who had spoken against FIFA in regards to corruption) out. Or, and this is what I would put money on, they’re doing both.

It should be noted that the Asian confederation were the only ones who voted so if anyone is sexist or corrupt, it would be them. Each Asian country got one vote. But FIFA is also guilty by association as a result for instituting this system and allowing the rules to be so easily exploited.

FIFA should be recognized for appointing Fatma Samoura as its Secretary General but the AFC not electing Moya Dodd was a low blow that set them and FIFA back when it comes to treating women with respect. This was an opportunity for FIFA to have a qualified woman actually make a difference and shape the future of soccer as well as women’s soccer. Instead, we got someone who couldn’t even be bothered to know who won the Women’s World Cup.

Maybe I’m wrong and Mahfuza Akhter will be a great member of the FIFA Council. But given FIFA’s past, they lost any and all expectation that they would ever make a decision because it was what’s right for world soccer. It may be unfair, but I can only go off of what FIFA allows itself to be portrayed as and what they show tells me that while they’re trying to be more inclusive and trying to get the people who are corrupt, there’s still a lost of sexism and corruption within FIFA and its confederations.

Alex Morgan’s reaction summed up most people’s reaction to this news.

You gotta be f***ing kidding me. https://t.co/jAQCkDRfN2