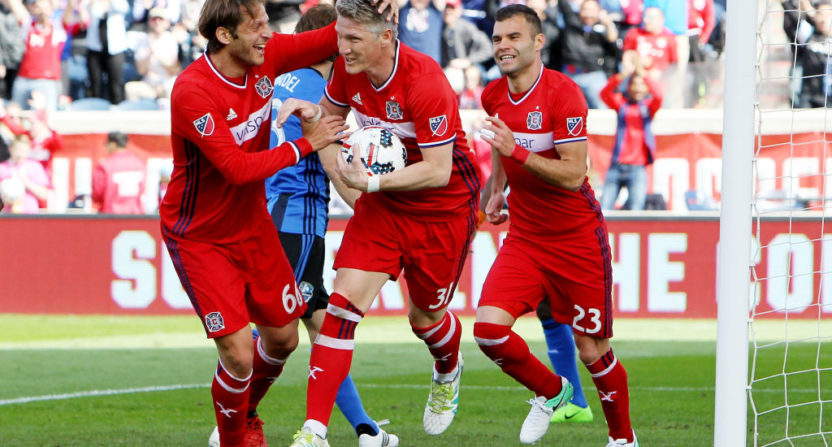 Week 12 of the MLS season featured 16 matches, including the midweek slate on Wednesday and the games on Friday, Saturday, and Sunday. Home teams picked up 13 of a possible 15 points midweek and 19 of a possible 33 on the weekend.

It’s still early, but we continue to see that picking up home points is the way to win in MLS. The best teams, though, accumulate the most road points, which is why FC Dallas and Toronto FC are the best two clubs in the league.

Expansion side Atlanta United FC faced arguably the league’s toughest schedule through the first 10 games. They played three times at home and played seven games against clubs that made the postseason last season. The first part of an expansion season is never easy, but Atlanta especially were dealt a rough hand.

For the first time since their 6-1 demolition of Minnesota in week two, Atlanta’s squadron of young attackers woke up and put their loads of talent and potential on display in a 4-1 home flyby of Houston. Miguel Almiron, a 23-year old No. 10, scored a hat trick and feasted on gaps in the Dynamo’s central midfield, while Hector Villalba admirably filled Josef Martinez’s role of field-stretching, channel-running forward. Against a not-so-agile center back tandem of Adolfo Machado and Leonardo, the front four had a pretty easy time.

Almiron had spent the first 10 games darting through midfields and getting fouled like no other player in MLS can. He racked up two goals and four assists, but had struggled to find open space to work and create goals. The disorganized Dynamo afforded him the perfect opportunity to figure out where and how to move in the attacking third.

Julian Gressel’s continued performances on the wing — he has two goals in two games — add an unexpectedly potent element to a speedy, quick-fire attack. His clever movement in the final third helps Atlanta create big chances on goal without having to get out in transition or get a perfect individual move from one of the attackers.

As the schedule lightens a bit, we’ll get to see more of how good they can be, and how wonderful the atmosphere is they’ve created down in Georgia.

D.C. United know something about sneaking into the playoffs after a couple of midseason acquisitions and a late-season run. They did it last year with Patrick Mullins and Lloyd Sam leading the way.

Right now, they’re sitting comfortably at the bottom of an increasingly-competitive Eastern Conference after a stretch of three straight home losses in which they, incredibly, lost by a combined score of 6-0 to three fringe intra-conference contenders (Philly, Montreal, and Chicago). They’re six points out of a playoff spot with a crowded slate of three games in seven days coming up.

Things aren’t looking great in the nation’s capital — in so many ways, but I digress — and there is no immediate end in sight for the D.C. faithful, who just might have to count on another midseason acquisition to save them. A 4-0 shellacking midweek against the Union followed by a 1-0 drab performance against the Fire on Saturday put the icing on the cake for Ben Olsen and co., who have some work to do with a roster that desperately needs a spark.

To be fair, dynamic winger Patrick Nyarko, likely the only attacker on the team willing to take chances and run at defenders, has been out since early April, and lead scorers Luciano Acosta and Patrick Mullins have been in and out of the starting XI for various reasons. These are valid excuses, but they don’t completely excuse a stretch of three straight scoreless performances against crucial conference rivals, especially at home.

Olsen has been unable to pull solid performances from almost any part of his lineup. Bill Hamid, who remains the best goalkeeper in MLS in my humble opinion, has flubbed some balls and looked a bit shaky at times despite multiple performances in which he appeared to make 90,000 saves. Steve Birnbaum, once a consistent USMNT performer, hasn’t been especially steady, while the Sean Franklin-to-center-back and Nick DeLeon-to-right-back experiments haven’t turned up game-changing results.

Marcelo Sarvas has seen Father Time quickly catch up to him, leaving a gaping hole in defensive midfield. Ian Harkes has been increasingly less creative, even losing his starting spot against the Fire, and as much as Olsen wants Sebastien Le Toux to be an important part of the attack, he’s never going to make up the many deficiencies DCU have.

They haven’t been unlucky, either. The stats show that they are bad.

No surprise here, but #DCU still gets no love from our model. Their xGD of -6.43 is worst in the league. https://t.co/OQCOgUgqoY

Time for something new, Ben.

Folks, we have a frontrunner for Newcomer of the Year. Chicago’s Nemanja Nikolic has six goals in five games to place himself at the top of the Golden Boot race and Chicago near the top of the conference.

Nikolic, a Polish forward brought in as a DP in the offseason, is the first legitimately good attacker David Accam has been able to play with in at least a couple of years, and is a massive upgrade over guys like Luis Solignac, Kennedy Igboananike, and David Arshakyan. He is constantly moving, constantly needling at the channels, and always shooting.

While the assistant referee’s arm probably gets tired after waving the flag so much on him, his ability to push defensive lines and get in behind over and over again even without a true No. 10 on the field is the primary reason for Chicago’s early success. Unless Almiron goes crazy soon, Nikolic is a few solid lengths ahead of the Newcomer of the Year pack.

He’s been great, but I can’t say I’m especially convinced that the Fire are truly a contender. I think the Bastian Schweinsteiger move could ultimately bite them as teams figure them out and start treating him like an Andrea Pirlo-type weakness in central midfield, and I’ve never seen Luis Solignac or Michael de Leeuw as starting-caliber players in this league. Brandon Vincent is having a career year and Dax McCarty is playing really well, but will the Fire stick around in the elite realm of the Eastern Conference? I have a hard time picturing it.

Sporting KC have established themselves as one of MLS’s three best teams, along with FC Dallas and Toronto FC. They allow an impressively low amount of goals and have seen Gerso add an element on the wing that they haven’t seen since Krisztian Nemeth left for Qatar.

Their 6-4-3 (wins-draws-losses) record has come playing, mostly, the same formation: a 4-3-3 with Tim Melia in goal; Seth Sinovic, Matt Besler, Ike Opara, and Graham Zusi along the backline; Ilie, Roger Espinoza, and Benny Feilhaber in midfield; and Jimmy Medranda, Dom Dwyer, and Gerso in attack. It works.

But they’ve experienced some issues when they have switch it up. Two of their three losses came when they had to rotate the squad, and in a long, grueling season requiring a deeper roster, this isn’t a promising development for Peter Vermes and co.

Their most recent defeat, a 2-0 loss in Vancouver, came without Dwyer, Medranda, Feilhaber, and Opara. Opara, who was also rested in their 2-0 defeat in Minnesota a couple weeks ago, has proven to be a crucial element of their lineup. The team has allowed a total of just five goals in his 11 games.
Players like Latif Blessing and Soni Mustivar have been solid off the bench, but their lack of success without Opara and others should be a troubling thought for Sporting fans.