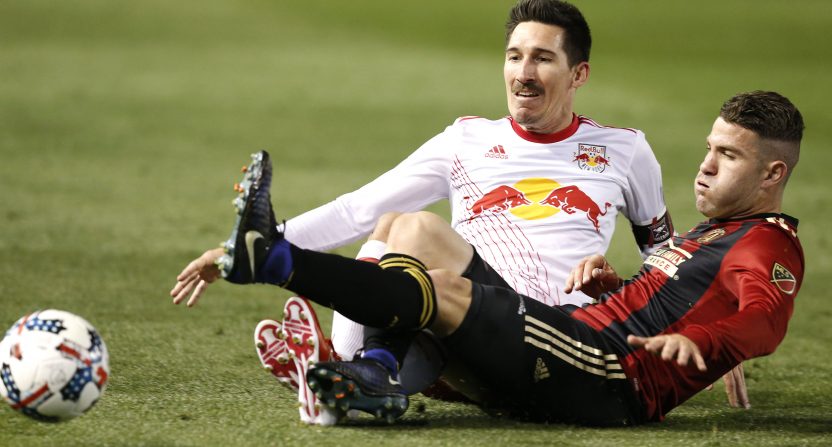 Each of the last two years, New York Red Bulls manager Jesse Marsch has had his team playing a 4-2-2-2 formation at the beginning of the season rather than the 4-2-3-1 that has made them among the best teams in MLS. Last year, it took him only a few weeks to move away from the formation, as they were giving up goals left and right and their star striker, Bradley Wright-Phillips, wasn’t scoring goals.

Marsch has tried the 4-2-2-2 again this season, likely on advice from RBNY’s German counterparts Red Bull Leipzig, who have used it consistently in a successful Bundesliga campaign.

Again, it hasn’t worked like the Red Bulls would have liked, although for different reasons than last year. They have the results — six points in three games is not too shabby — but it hasn’t looked very threatening so far. Plus, the Red Bulls have often looked better when they switch back to the 4-2-3-1 later in games.

Originally, the reason for the switches have been a desire to give Wright-Phillips a partner up front to create more space in the final third, as well as to give their attacking players more of a license to create their own space, rather than leaving most of the goal-scoring responsibilities to Wright-Phillips and Sacha Kljestan. This coincided with the goal of becoming more of a postseason threat, so more players in the box and a partner for BWP seems like a good recipe for November failures, right?

That may indeed be correct, but in March, it has yet to come off well. They were lethargic in the opener in Atlanta, and needed a switch to something resembling a 4-1-4-1 (as well as Derrick Etienne Jr. coming off the bench) to make a late comeback. Colorado’s lack of attacking intent allowed them to cruise to a 1-0 victory in week two.

Most recently, in their 3-1 loss to Seattle on Sunday, the Red Bulls mostly created nothing in attack other than a cross BWP was able to get a good head on. Their patented press wasn’t even particularly effective, as Jordan Morris constantly got in behind using his classic diagonal runs outside of the center backs.

RBNY lost trust in the 4-2-2-2 in the second half and again decided to transition back to a 4-2-3-1. They still were unable to get much of anything on goal, and they allowed the Sounders to run away with it. So why hasn’t the formation caught on yet? There are two primary reasons.

For one, they do not have a good enough center forward to make much of a difference alongside Wright-Phillips. Gonzalo Veron can be a dynamic player at times, and he’ll slip a few in every once in a while, but his hold up play is non-existent. Recent Norwegian acquisition Fredrik Gulbrandsen started in Seattle, and he was basically anonymous in 56 minutes of work.

Secondly, Kljestan is pushed out of the middle, and is tasked with defending wide more often than he is creating centrally. Kljestan is not like Nicolas Lodeiro in that he would rather receive the ball in the middle and work from inside-out than start from the flank and work outside-in. This, plus the increased defensive responsibilities that come with being pushed to the wing, have limited the amount of time he has on the ball, and thus the amount of chances he creates.

The other effect of having Kljestan work from the wing is losing the advantage of having three central midfielders. This can allow you to be overrun (it’s a simple numbers game) and it diminishes the effect of the press, which often relies on condensing midfield passing lanes and overwhelming opposing possession structures.

They aren’t seeing 4-3 games like they did last year, but the problems with this formation remain, and they will continue to haunt Marsch in the Red Bulls until they are fixed.