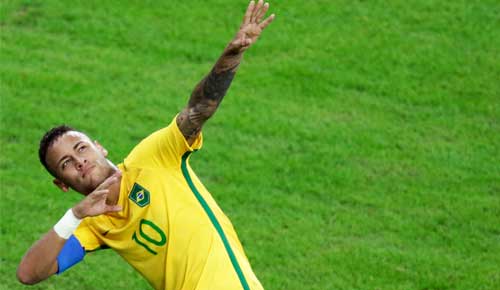 Saturday was a big day for Neymar, who scored Brazil’s only goal and converted the decisive penalty kick in Brazil’s thrilling victory over Germany in the Olympic gold-medal game.

The free kick was truly a sight to behold.

Neymar's goal tonight against Germany in the Olympic final, captured from the stands!

But just as notable as Neymar’s remarkable free-kick goal was how he chose to celebrate it. With Usain Bolt watching from a suite above the field, Neymar did his best impression of the Jamaican sprinter, leaning back and pointing up the way Bolt famously does after races.

Gif: Neymar celebrating his goal earlier with the Usain Bolt celebration. Bolt is cheering from the stands. pic.twitter.com/LfhM4UX5Ot

The gesture began as what looked like a dab but transformed into a pretty unmistakable nod to the world’s fastest man.

Neymar dedicates his goal to Usain Bolt, who is at Maracanã Stadium watching the final.

One of the coolest things about the Olympics is seeing all these great athletes in one place, often somewhat awed by each other’s company. Neymar is one of the most famous athletes in the world, but that doesn’t stop him from fan-boying for Bolt.

Later in the evening, after extra time ended with the score 1-1, Neymar broke a 4-4 tie in penalty kicks to give Brazil a signature gold medal. The victory was somewhat redemptive for Brazil, after its humiliating 7-1 loss to Germany in the 2014 World Cup semifinals.

In case Neymar wasn’t already a big enough hero in Brazil, Saturday pretty much assured he’ll never pay for another drink in his home nation.

People are dancing in the streets of Rio. Literally. High fives and hugs everywhere.