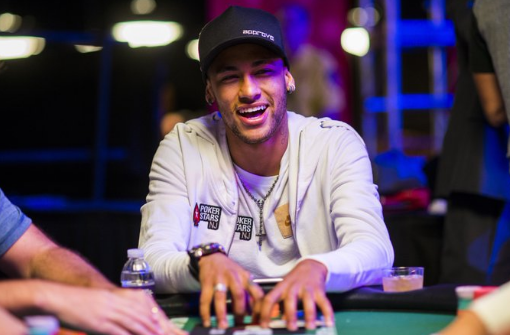 Brazillian soccer star Neymar has earned a seat at the World Series of Poker.

The 24-year-old recently sat out of the Copa America tournament, instead opting to do some good old fashion gambling. Neymar spent last weekend in Las Vegas and ended up securing a seat at the World Series of Poker after winning a PokerStars event.

Neymar, who’s sponsored by PokerStars (can’t see that being a conflict of interest) won a matchup in a two-table satellite event. You can watch him pull off a victory alongside his huge entourage.

Perhaps starring in all of those awful commercials has actually refined Neymar’s poker skills. It’s a rare example of an athlete actually using a sponsor outside of appearing in commercials for certain products — although, him attending the event could still be a giant publicity stunt.

For those looking to see the Barcelona star attempt to win the World Series of Poker, you’re going to be disappointed. ESPNFC reports Neymar’s busy football schedule will prevent him from playing in the tournament.

Neymar will next suit up for team Brazil at the 2016 Rio Olympic Games in August. Since Brazil was stunned in a loss against Peru, they’re likely hoping Neymar can bring some of his poker luck to the team at the event.

[Image via World Series of Poker]