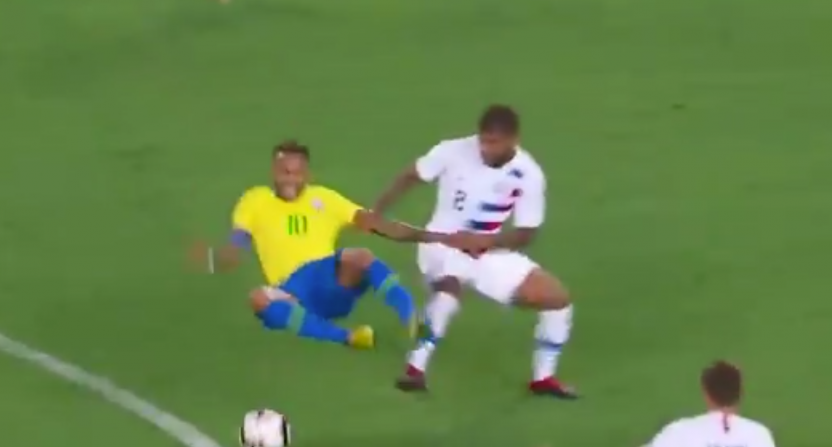 Bless soccer stars. They live in a world of ironic detachment that allows for some wonderful things. We get to live in a world where Cristiano Ronaldo shows off his glistening abs at the most inopportune times just because he can. We get to watch Zlatan Ibrahimovic proclaim himself a messiah, make it seem like he’s in on the joke, but know that deep down he’s not actually. And we get to enjoy Neymar flopping and diving over and over and over again without any apparent grasp that the rest of us think he’s a fake.

Y’all already know to catch Neymar at the academy awards for best actor of our century 🏆 🏅 pic.twitter.com/rk3ViU8nus

Neymar is so prone to diving that people make entire compilation videos out of the many instances.

His penchant for hitting the ground came to a head in the most recent World Cup when Neymar’s dives and fake reactions were so ridiculous that they became worldwide memes and his name became synonymous with “fake an injury.”

Here's Neymar's ankle getting stepped on before he died from the injury and was resurrected pic.twitter.com/4BKcrzT9sz

Neymar’s reputation preceded him in a recent match for Brazil against El Salvador at FedEx Field. Brazil cruised to a 5-0 victory but Neymar was given a yellow card after he tried and failed to get a penalty called following a “collision” with another player.

"Did you watch the World Cup?"

Afterward, Neymar shared his disgust over the card and how his reputation has poisoned the minds of referees and opponents into thinking he is exactly who he is.

“I do not know what I have to do to live with it [this reputation], there’s no way I’m going to stand for a situation like this. I think it has to end,” he said without a hint of irony, according to Globo Esporte. “If he does not want to give the penalty, it’s not a problem, but the card is unnecessary.”

Neymar also seemed to imply that because this referee was chosen to work a Brazilian national team match, he should…have more respect? Not give out yellow cards to Brazillian players? Let the flopping and diving go unabated? Of course, a guy like him is so detached from reality that we shouldn’t expect him to see the problem anymore anyway.