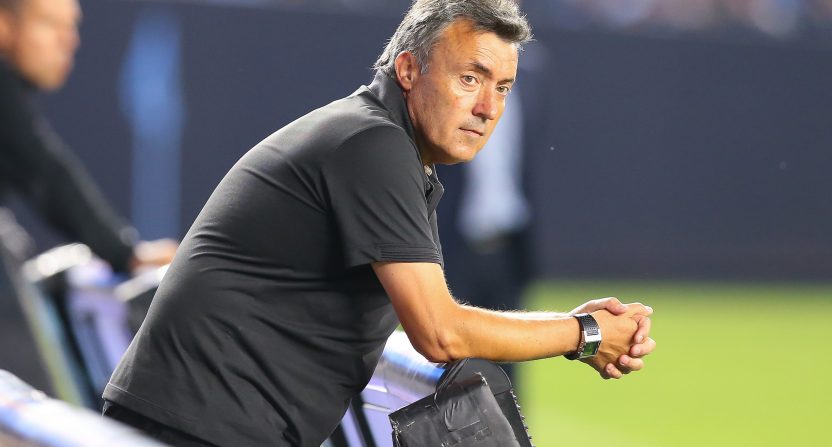 Losing a coach midseason, in a game that stresses tactical identities, team shape and other grand concepts, is a tough pill to swallow. NYCFC, who saw Patrick Vieira depart in June for France’s Nice, have eloquently survived in the two months since their manager left. They are 5-2-1 in Domenec Torrent’s eight games.

It helps when the new manager is as experienced at top-tier levels of soccer as anyone in the world. Torrent was Pep Guardiola’s right-hand man from Pep’s beginnings at Barcelona B all the way through last year’s Premier League championship with Manchester City. Guardiola, who has 24 trophies in 11 years as a coach at the top level, is widely considered the best manager in the world.

NYC is putting City Football Group’s ideas into practice, with their possession and counter-press and eternal willingness to heave players forward. The idea isn’t necessarily to force turnovers or use the press as a defending mechanism, the guiding principles of Jurgen Klopp’s Liverpool and the rival New York Red Bulls; rather, the Light Blues want to pin the opponent deep and space players so that attackers rotate. And when that happens, gaps open as a result.

Torrent isn’t quite like Vieira in his dedication to possession, although he follows “Build From The Back” ideals as much as the next CFG manager. The Spaniard wants his team to hold the ball high up the field and flood the half-spaces in advantageous areas.

“We want to play with five attacking players, with Jesus [Medina], Maxi [Moralez], Tati [Valentin Castellanos], Jo [Inge Berget], Ismael [Tajouri-Shradi],” Torrent said after a 2-2 draw with Vancouver last Saturday. “We play a 4-3-3 with wingers wide and many, many times we found, especially on the left side, Ismael.”

He sets his wingers wide, as he said, and pours numbers into the resulting space. Teams have to shift their entire shape to accommodate players hugging the touchline. The middle of the field, then, is more easily controlled. NYC creates a numerical advantage and capitalizes on it with a free-flowing midfield three and fullbacks supporting the attack.

Their passing is centered less in the defensive third and more in the middle and attacking thirds under Torrent:

You can see NYCFC gradually shifting play out of its defensive third under Torrent. Data from @AnalysisEvolved. pic.twitter.com/D12tBmiYH4

This overwhelming style of play, which we saw remnants of while Vieira was in charge, is designed specifically to exploit the home-field advantage of Yankee Stadium. On a smaller, narrower field, teams tend to have trouble stringing passes together and maintaining a coherent shape. NYC not only excel at those two things, but their gap-hitting, fling-numbers-forward ethos is perfect when there is less area to cover.

The advantages of stunting wingers wide — the hypothetical space that should arise in midfield, as an example — are less prevalent at Yankee Stadium, naturally. But the narrow field works to their advantage in other ways. Notably, it’s not as easy to hit them on the counter with less room to spray the ball wide. That helps eliminate the primary weakness of NYC’s style of play.

Vancouver showed that they are still vulnerable on the other end by stealing that draw in the Bronx. (It helped that the left side of the defense fell asleep on an 87th-minute cross, giving away a 2-1 lead.) But the Whitecaps are just the second team, after first-place Atlanta United, to get a result away at New York City.

Per Eliot McKinley of American Soccer Analysis, this is NYCFC’s passing network from the Vancouver game: 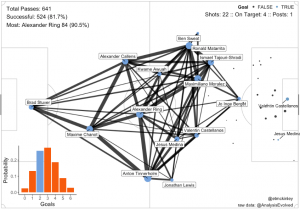 This shows the players’ average positions and the amount of passes exchanged between them. Looking at the starters (Sweat, Lewis and Awuah came on as subs), Torrent’s 4-3-3 is clear. Jo-Inge Berget leads the line as a true number 9, while four other attacking players — in addition to fullbacks Ronald Matarrita and Anton Tinnerholm — support from various positions.

None of the wingers are set on the touchline as their average position. This is partially because that is not a viable defensive shape, and partially because of the rotation that naturally occurs with so many dedicated attackers. Jesus Medina and Valentin Castellanos (who played well in his MLS debut) often took each other’s place. Some goes for Maxi Moralez and Ismael Tajouri-Shradi on the other side.

It’s all free-flowing, by design. It’s ideal for an aggressive, probing player like Medina, who has plenty of on-ball flair and loves to take defenders on one-v-one. Moralez, who at times has played as a false 9 with David Villa and Berget hurt, has been the team’s best player. He has eight goals and 12 assists, starting every game.

Moralez has a way of slipping under defenders, squirming through holes and attaching the ball to his feet in tight spaces. Occasionally he drifts to the wing, as a new starting point for slimy dribbles and creative touch passes. Everyone in the attack benefits.

Tinnerholm has been one of the better right backs in the league this year, and he’s capable enough on the ball to both support the right-sided attackers and overlap for them. Torrent’s system, similar to Guardiola’s and other modern tactical looks, requires fullbacks who can pass like midfielders. Tinnerholm fits the mold.

Recent results, including the disappointing dropped points to the Whitecaps and last week’s loss in Seattle, have revealed some lingering issues. They have a tendency to rotate the squad a lot, resulting in some disjointedness. Winger Jonathan Lewis should be getting more minutes. The loss of Yangel Herrera for the season has left them weaker in midfield.

But NYC look cemented in the Eastern Conference’s top three. Their relentlessness at home has been brutally effective, and they will be getting David Villa back from injury soon. Their weakness under Vieira was always playoff success. Thus brings Torrent’s next challenge.