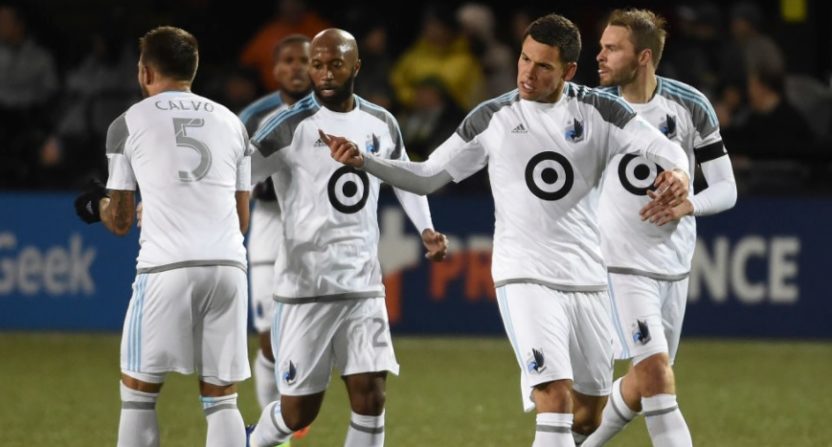 Following the action on the penultimate weekend of the MLS regular season, the clubs on the outside looking in from the red line have continued to become clear, and in the lead-up to Decision Day on Sunday, the focus will rightfully be on the 14 clubs still in the race. Real Salt Lake, San Jose, and FC Dallas will battle it out for the final Western Conference berth while everyone else will be vying for a better seed.

Before we jump all the way into the chaos that is the MLS Cup playoffs, though, we have to have a full read on the clubs that missed out, and their outlook on 2018.

We’ll leave out those two teams out west in our quick-fire post-mortem takes on the eight already eliminated clubs:

The Revs are in the midst of a search for Jay Heaps’ replacement as manager after another underachieving season accentuated by a 7-0 September loss at Atlanta. For all the talent on this roster, rarely have we seen a clear direction from them, and now they’re staring at a massive cash-infused attacking logjam backed up by weaknesses in defensive midfield, center back, left back, and goalkeeper. It’d be nice if there was any semblance of effort to even start a productive youth academy, or maybe move out of the large football stadium they’ve been stuck in since 1996.

Reports came in earlier this month about a possible coaching change coming in Montreal, with Miami FC manager Alessandro Nesta apparently being the likely replacement. The Impact have begun to rely too much on Ignacio Piatti’s star power and started neglecting other weaknesses, notably struggles in central defense and balance in their counter-attacking 4-3-3. Samuel Piette has been a clear success in defensive midfield, though, and they possess promising young players like Anthony Jackson-Hamel and Ballou Tabla. There’s some base for a quality roster next year.

The Union were never able to overcome their dreadful start — they didn’t win until May — and despite some late success, they’ve spent pretty much the entire season quietly bouncing between seventh and 10th in the conference. They still don’t have a clear enough identity beyond lumping balls forward to C.J. Sapong, and they have been very poor in integrating developing players like Fafa Picault, Keegan Rosenberry, and Josh Yago. Philly, a place with a serviceable academy structure and capable USL team, is where young players go to die, it often seems.

The Kaka era has passed in Orlando, with OCSC finishing a distant seventh in 2015, eighth in 2016, and now sit 10th with one game left in 2017. Orlando will have more of a clean slate next year without the mostly-unproductive legend (who was better in 2015 and somewhat in 2016, mind you) as well as aging Italian midfielder Antonio Nocerino, who presumably will also walk out the door. Now, they have to sort out the striker mess they gave themselves in July — meaning find a selling spot for Cyle Larin — and then sign a central creator and two starting-caliber backline pieces. They have some serious top-end work to do.

DCU have especially clear reasons for desiring a quick improvement in 2018: new soccer-specific Audi Field will open to replace legendary RFK Stadium next year. Phase 1 of their quickie rebuild took place this summer, with Russell Canouse entering to play d-mid and Zoltan Stieber and Paul Arriola joining the attacking lineup. They still have a lot to figure out, though, including whether Patrick Mullins is a suitable starting striker, who stays and who goes on the backline, and Bill Hamid’s future situation.

Things were much less disastrous in Minnesota than some seem to think this season. After a horrific start to the season, they’ve found defensive stability and an attacking core to build around, with results starting to flow in the second half of the season. In their 10 games since August 15, they have four wins, two draws, and four losses; those 14 points is good enough for third in the West since that date. The trio of Abu Danladi-Christian-Ramirez-Kevin Molino is a talented trio up top, and midseason acquisitions Sam Cronin, Marc Burch, and Ethan Finlay (all starters) have been huge, alongside steady center back Brent Kallman and tempo-setting No. 8 Ibson.

Minnesota has identity issues to figure out and plenty of personnel to acquire, but we have to remember that this is a normal, direction-pointing expansion season that has been overshadowed by Atlanta’s immediate success. Playoffs are a possibility next year.

By no means can Colorado even compete with Minnesota’s organizational potential. Their list of team needs is massive (only goalkeeper, maybe center back, and maybe right back are filled right now); they are in the process of hiring a coach, hopefully a forward-thinking, progressive manager in the mold of San Jose’s Chris Leitch; and there is literally zero youth talent to be hopeful about aside from 21-year-old center back Kortne Ford. They also will have to shake the Pablo Mastroeni syndrome of bunkering out 1-0 losses every week and maybe try and develop a productive attack, which is not easy. The Rapids have more to do with their roster than any team in MLS.

Sigi Schmid couldn’t get this team to the playoffs, but he has started experimenting and having some success, even picking up some good results recently. As long as they exile Jermaine Jones and Clement Diop from StubHub Center forever and then sign some defenders, they can be pretty confident with their base: Giovani and Jonathan dos Santos up front and in midfield, Sebastian Lletget next to JDS, Romain Alessandrini and Ema Boateng on the wings, and maybe, possibly, Gyasi Zardes at right back. If they can get their young guys integrated (which Curt Onalfo couldn’t do), they will have some nice assets at their disposal. LA will rebound next season, barring a second consecutive horrendous offseason.