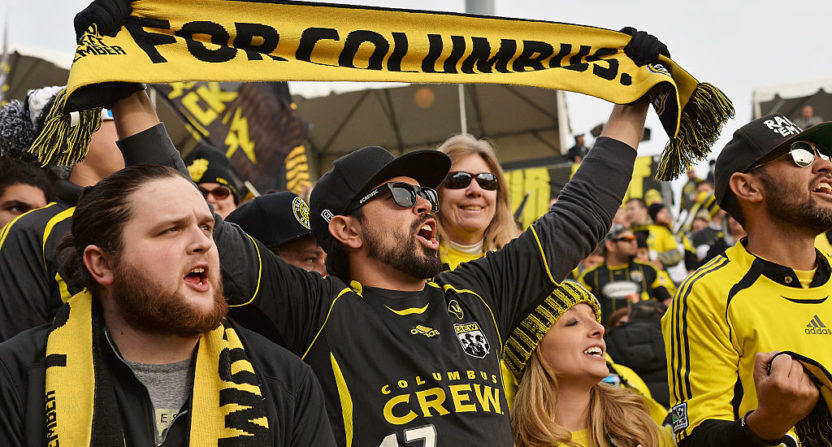 The fight to Save the Crew is possibly heading to court.

After it’s become crystal clear in the last week that Columbus Crew owner Anthony Precourt has zero interest in keeping one of the founding franchises of Major League Soccer in its home market, the state of Ohio and city of Columbus are taking an extraordinary step to save their team. Last week, Precourt engaged in a press offensive in Austin turning his back on Columbus and trying to save what has been a bumbling, stumbling effort to move the team.

And now Ohio is fighting back. On Monday, Ohio Attorney General Mike DeWine announced he is filing a lawsuit under the state’s so-called “Art Modell Law” to prevent the team’s possible relocation.

Here is the announcement of the suit from the Attorney General’s office:

“Today I have filed a lawsuit in Franklin County to try to #SaveTheCrew and keep the black and gold in Columbus,” said Ohio Attorney General Mike DeWine. “Loyal Crew fans in Columbus have invested their time and loyalty in this team, and they have allowed the Crew SC to capitalize from financial incentives paid for by their tax dollars. I am left with no other choice than to file this suit to ensure our laws are followed.”

“As I have said, we believe Columbus Crew SC belongs in Columbus. We have a rich history of professional soccer and some of the most loyal and dedicated fans in the league,” said Mayor Andrew J. Ginther (D-Columbus). “Just as importantly, the team plays in a taxpayer-supported facility, and Precourt Sports Ventures and Major League Soccer have accepted financial assistance from the state of Ohio and the City of Columbus. State law provides us with this protection.”

“I am very pleased that our state’s top law enforcement officer is vigorously enforcing longstanding Ohio law,” said State Representative Mike Duffey (R-Worthington), a leader in the #SavetheCrew effort. “The Crew SC is our team. Our town. Neither the MLS or Precourt Sports Ventures can operate above Ohio law.”

The “Modell Law” was an unknown to most citizens up until the #SavetheCrew saga began, but it was put on the books after the heartbreaking relocation of the Cleveland Browns to Baltimore in the late nineties to prevent teams from leaving the state in the future. The crucial point the state of Ohio and city of Columbus are making is that the Crew qualifies for the law because they benefited financially from tax-supported facilities and assistance from the state and city. The lawsuit mentions specifically five separate occasions that cites the Crew getting a break from the local government including a below-market rate on the stadium lease and millions in state funds to improve the parking lot.

And of critical interest to the Save the Crew movement, the law dictates that the city or a group of local owners be given an opportunity to purchase the team after an official notice is given to relocate.

In 1996, following the relocation of the Cleveland Browns to Baltimore, the General Assembly enacted Ohio Revised Code 9.67. The narrowly written, common-sense statute applies to owners whose teams use tax-supported facilities and accept financial assistance from the state and its localities. It prohibits these owners from moving their teams elsewhere unless they give at least six months advance notice of the intention to move and give the city, an individual, or group of individuals, who live in the area an opportunity to purchase the teams.

It’s impossible to predict how this could turn out since a law like this has never been tested before. The city of St. Louis is suing the NFL after claiming the league didn’t follow its own relocation rules in moving the Rams and is seeking to recoup funds. However, that lawsuit is solely focused on money and the Rams have already left town. Some legal scholars are skeptical the Modell Law could hold up under federal interstate commerce laws. However, MLS and Precourt will now have to go on the defensive and ask themselves whether it’s worth it to fight this on two fronts – a lawsuit in Columbus and stumbling blocks in Austin.

If this turns into a lengthy court battle, the first issue is that it would throw a major wrench in Precourt’s relocation timeline. He wants to be in Austin to start the 2019 season, but the first hearing dates are set for February and March 2019. Second, and perhaps more significantly, the discovery phase could also lead to MLS and the Crew being forced to open up the books and disclose their true financial situation. Given some of the doubts surrounding the “business metrics” being used to justify the move, it could poke a major hole in the narrative PSV/MLS are trying to sell. Furthermore, with MLS and SUM facing so many serious questions about their lack of transparency over the years, the last thing the league will want is its financials being meticulously scrutinized in court.

Beyond just the future of the Columbus Crew, this could have a major impact in all of professional sports. This could be a landmark lawsuit because it represents a city and a state taking up a legal fight against an owner in an effort to save their team. As long as there has been professional sports, owners and leagues have used the threat of possible relocation to extract as much money and real estate out of cities that they can. That’s exactly what Precourt is trying to do in Austin by pleading with the city to hand over their most valued park land to him for his own personal benefit. It even emerged today that the Philadelphia Union could be the next MLS franchise under the microscope thanks to an apparent clause that allows them to relocate if the team is in the bottom quarter of league attendance.

Could this represent a turning point in the “stadium extortion racket” with cities finally fighting back? Especially where the use of taxpayer dollars are concerned, cities should feel like they have the right to protect the investment of its citizens and not write a blank check to owners only to watch them leave town when they seek more millions. If the state of Ohio is successful in preventing the relocation of the Crew, expect to see cities and states all around the country act quickly to protect their community assets and protect fans from the threat of losing their favorite team.