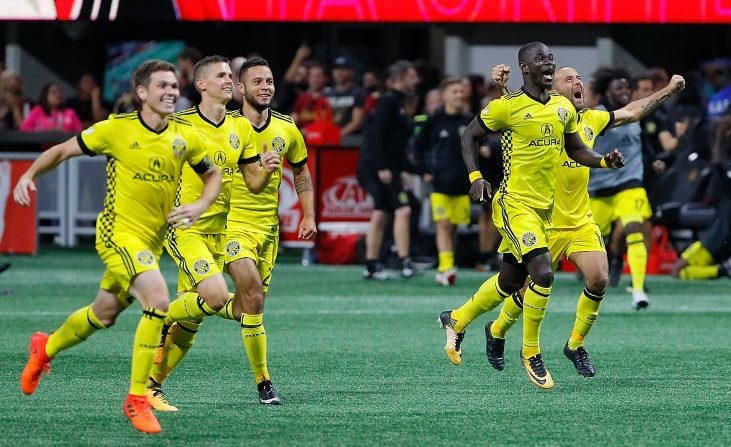 Whenever you go to sleep tonight, I want you to think of Karen Crognale. You may not know Karen Crognale, but you should, because Karen is the person who represents why it is necessary to save the Columbus Crew.

Karen is the mother of Alex Crognale, a defender for the Columbus Crew. He is a graduate of Gahanna Lincoln high school in Columbus. And he is a Homegrown Player. This is what is supposed to make MLS different than any other American professional sport. This is what is supposed to make the bond between soccer club and community special across the globe. The “Homegrown” rule allows young players who grow up in a community and play for their local MLS academy to one day be signed to the roster of the major league team. You and the league apparently love the idea so much that you’ve dedicated a showcase to Homegrown Players during All-Star Weekend.

I don’t know the Crognales, but I can imagine that the pride and joy of seeing Alex dress in the black and gold for his hometown soccer team would be unmatched. Now, Karen Cognale is “gutted” over the threat of her family’s team being “ripped away” from them with the pessimistic news that came out of your meeting with Columbus officials.

Look at if from my view. My hometown team gets ripped away, yet my son still plays for them. I’m gutted.

Exactly why ALL MLS supporters and Academies need to contact their owners and let them know this is not OK. Years of building youth soccer and supporting MLS and it’s all taken by an absentee owner and complicit league. Shameful.

Commissioner Garber, what message are you sending to all of the players, youth, and families that dream of playing for their own hometown team? That it can all be snatched away from them by a greedy, absentee owner who wants to skirt your own expansion process to save tens of millions of dollars? That you will stand silently by and watch it happen, or even worse, work behind the scenes to help make it a reality? That will you do nothing for the Crognales and the thousands of people in Columbus who are the bedrock of MLS and American soccer?

Commissioner Garber, what would you say to the kids who currently play for the Crew Academy teams right now and their families? What would you say to the family who is sacrificing everything they can so their son can play for the Crew SC Academy U-14 squad and try to live out a dream? Are the hundreds of youth and families currently involved in the Crew SC Academy supposed to pack up and move to Austin as well? Are they supposed to go along with a club being uprooted from its community after 20 years? Or will they be left behind, too?

If you took the time to visit Columbus and have a face-to-face conversation with these parents and youth, what would your answer be to them when they tell you how “gutted” they are to have their team “ripped away?” Do you have any answers at all?

You could forgive supporters of the Columbus Crew for thinking that the league and its own owner has been working against the city, as every piece of circumstantial evidence makes it seem like that is the case. And instead of rallying to support a fanbase that helped to establish and then save Major League Soccer, your deafening silence has spoken volumes of the true values of Major League Soccer. I hope it isn’t so, but it is painfully obvious that your support currently lies with dollars over people and millionaire owners over community.

When you unveiled the new MLS logo for the 2015 season, you included three stars. The league said in its statement, “The three stars represent the pillars of our brand: For Club, For Country, For Community.”

I would urge you to reflect upon what it means to stand “For Community.” The #SavetheCrew movement has been one of the most remarkable community-driven initiatives that American sports has ever seen.

Isn’t that what “For Community” is all about, Commissioner Garber?

Everyone outside of Austin (and even some people within Austin itself) is against this proposed relocation. Even fans in other MLS cities are telling you they will no longer give you their business if you let this happen. #SavetheCrew has drawn universal support from across the soccer globe. And make no mistake, even though things look bleak right now, the City of Columbus and Crew fans will not give up or give in until the last moving truck takes the exit onto I-71 South.

But if you approve of this brazen thievery of the Columbus Crew and allow the club to be moved to Austin Texas, you must replace that third star “For Community” with a dollar sign. Because it will show that everything you and Major League Soccer has stood for is a lie. It will be a betrayal of not just Columbus, but of every single current and prospective MLS fanbase. It will cut the heart out of American soccer and leave a soulless corpse that will never be what you aspire for it to be.

If you allow the Columbus Crew to be uprooted to Austin, Texas on the whims of Anthony Precourt, it will tell everyone who has any interest in professional soccer in America that their club and community are only a means to an end for making profit. It will tell people like Karen Crognale and everyone like her around the nation that Major League Soccer will turn their back on them in an instant. And it will one day lead Major League Soccer to crumble under the weight of your own greed.

Commissioner Garber, you must save the Crew. Because if you don’t, then Major League Soccer isn’t worth saving either.